It's a while since I last posted - it's amazing how the pressure of retirement weights so heavily on good intentions!  But I'm still alive and active, and I've reviewed some interestign thigns of late.  Here's one of them. 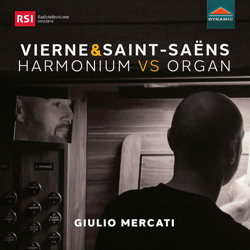 Louis Vierne’s 24 Pièces en style libre comprise short character pieces in all major and minor keys published in two volumes one year apart. All 24 pieces carry dedications to various relations, friends and acquaintances of Vierne, and all are written on two staves and designed to be played on either a harmonium or an organ, the intention being to provide useful repertory to organists whether they are playing in humble churches where only a harmonium exists, or in a great cathedral with a opulently resourced large organ. Some pieces seem particularly well suited to the harmonium (notably the Divertissement, Madrigal, and Choral), while others undoubtedly work best on a larger organ with at least two manuals and pedals (Lied, Carillon and Scherzetto), but there is no thread or cohesive sequence running through either volume other than the fact that over the two volumes, the pieces are arranged in ascending order of tonalities covering every major and minor key from C major to F minor (volume 1) and F sharp major to B minor (volume 2). As the title suggests (“24 Pieces in Free Style”) the pieces themselves vary widely in character and mood.

The subtitle of this new release from the Italian Dynamic label is “Harmonium vs Organ”, which might lead the unsuspecting listener to imagine we are to hear the two instruments side by side, but in fact Giulio Mercati plays all the pieces from volume 1 on a harmonium, and all of the volume 2 pieces on the organ of Lugano Cathedral. Perhaps, then, not so much a contest as an appraisal of what each instrument can do. But neither is it that, for the booklet contains no information about either instrument, and while there is a clutch of grainy black and white images in the booklet showing Mercati sitting at what appears to be some kind of keyboard instrument, whatever instrument (or instruments) it is has been effectively obscured by the darkness of the photographs. What I can discern from other research is that the organ of Lugano Cathedral was built by Vicenzo Mascioni in 1908, has two manuals, and a total of 35 stops including a large number of various manual, pedal and octave couplers; it is described on the cathedral’s own website as “turn-of-the-century vintage Mascioni”. As for the harmonium, while there is reference in the booklet to it being “Débain, 1892”, that gives us no help. Alexandre-François Debain was the man credited with having invented the harmonium some 50 years earlier, and his workshop made a great many single manual instruments. But he died in 1877 and Gellermann’s International Reed Organ Atlas, something of an authority on harmonium builders, suggests that the name was carried on after Debain’s death by a Parisian company called Rodolphe Fils et Debain, but was dropped in 1896 when the firm became simply Rodolphe Fils.

Despite all this (and dreadfully inaccurate and misleading booklet notes which include the wholly wrong statement that the pieces in volume 1 “have no dedications”), the performances, the recording, and the music itself, are of the very highest order and should be essential listening to every organist. Harmoniums, and this one is no exception, have an array of stop-knobs bearing descriptive names (“Flute”, “Trumpet”, and so on), but it is virtually impossible with the naked ear to discern any difference between them, and the instrument’s asthmatic wheezing tone is varied only by means of louds and softs engineered by expression tabs (often operated by the player’s knees) and by the additional and subtraction of stops, irrespective of the name on their label. Mercati is a master at using the expression, and he makes the 12 pieces of volume 1 an object lesson in how to colour and vary the tone of an instrument where the tone, by default, has no colour or variety. No such issues with the organ, which, in this instance, speaks very proudly into a generous acoustic. He does not overplay his hand, and generally uses suitably discreet registrations,. He roots out a wonderful pseudo-cello quality for the Lied, while the March Funèbre is positively electric in its sense of restrained power.

At almost 12 minutes, the Marche Funèbre outlasts every other piece by at least 100%, and in general Mercati plays the volume 2 pieces rather slower than the volume 1 ones; which is probably understandable given the nature of the two different instruments. By getting through volume 1 in under 45 minutes, he has time to add some more harmonium music, and while there is little to excite aural interest in Saint-Saëns’ 3 Morceaux – a hymn-like “Meditation”, a gentle “Berceuse”! and a prayerful “Prière” in the highly unusual time-signature of 11/4 - what is fascinating is that these three pieces, originally written for harmonium, constitute the composer’s Opus 1. They were composed in 1852 and published in 1858, designed for the domestic market in France, where the harmonium had become something of a popular domestic instrument.

Posted by Marc Rochester at 4:37 AM