Bis have released the full Rachmaninov orchestral recordings made by the Singapore Symphony Orchestra over the past decade. Here's my review from MusicWeb International. 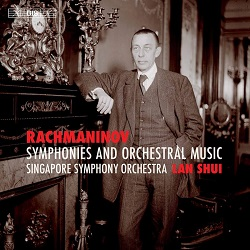 In 2019 Lan Shui stepped down as Music Director of the Singapore Symphony Orchestra – only the second holder of that post in the orchestra’s 40-year history.  His appointment in  1997 was followed by the orchestra’s move from the cramped and acoustically unedifying 900-seat colonial-era Victoria Concert Hall to the new, purpose-built 1800-seat Esplanade Concert Hall with its spacious auditorium, extensive backstage area and state-of-the-art (as they were then) acoustics.  Together, the changes of Music Director and performance home brought about a dramatic change in the orchestra.  Previously a mediocre band of fewer than 50 players performing to small audiences comprising mostly foreign visitors and expats, it was transformed into a fully-fledged, 96-strong symphony orchestra frequently playing to almost full houses of an increasingly engaged local audience drawn, in large part, by Shui’s preference for programming the big orchestral showpieces of the 19th and 20th centuries.  With a revitalised orchestra, a solid audience base, a top-notch performing venue and a growing international reputation, the Singapore Symphony caught the attention of Bis, who made no less than 28 recordings of the orchestra under Shui. These included the three Rachmaninov symphonies coupled with various other orchestral pieces, and these recordings, made between 2008 and 2015 in the generous acoustic of the Esplanade, have now been gathered together in a four-SACD box set.

That Shui was a protégé of Bernstein is manifestly obvious in his tendency to stop and wallow, self-indulgently at every opportunity for emotional excess, and then bustle along with almost indecent haste until it is time to stop and navel-gaze again.  For many – especially those who regard Rachmaninov as a kind of Chopin on steroids – this is the ideal approach, but it can suffocate the musical argument; as with the opening of the First Symphony, which unfolds with almost excruciating slowness, each note weighed down by an imposed significance which stifles any sense that this is leading anywhere.  But where emotion is suppressed by energy and the hustle and bustle of inner detail, Shui really draws some vivid playing from his Singapore orchestra.  The iconic Dies Irae theme is punched out with great effervescence in the second movement, to such an extent that the viola solo seems almost breathless as it fights to get its message out from under a canopy of eager pizzicato strings.  Shui also reveals an instinctive feel to pacing the approach to climaxes and, equally important in Rachmaninov, subsiding away from them, and in these his players are right there on his tails, readily responsive to his direction.  They are also prepared to give it their all when he decides to wallow in emotional rhetoric.

Almost inevitably, Shui pulls the emotional heartstrings of the third movement of the Second Symphony almost to breaking point, although overindulgence is compensated by a charmingly played, if rather thin-sounding clarinet solo, which keeps any sense of pathos at arm’s length.  But while opportunities for emotional wallowing are seized with alacrity, Shui also drives much of the music along with great impetuosity, making some of the more athletic passages (such as the fugue of the second movement) truly electrifying.  Shui’s tendency to over-state string portamentos in the finale really grates with me; but I accept that is a very personal matter, and there may well be those who find it, if anything, underdone.

For me, the most successful performance is that of the Third, a somewhat elusive work and something of the black sheep among Rachmaninov symphonies.  Shui underlines the wistfulness of it all, making sure we all get the message that this is an exercise in nostalgia; Rachmaninov in America, wishing he was back in pre-Soviet Russia where people respected him as a composer and did not just did not see him as some kind of freakish throwback, scowling at the new, forward-thinking land which had so generously opened its doors to him and paid for him to live in some luxury.  Flashes of optimism burst out in short-lived blazes of glory, which are effectively extinguished by the fire blanket of strings which Shui moulds so effectively, and even the apparent triumphalism of the final movement is played down to maintain the underlying sense of longing for times past.  This is a broad vision of the work, avoiding excessive introspection or overly dramatic climaxes, and it works extremely well; not least the exquisite violin solo in the second movement.

The symphonies, lushly padded out by Shui and warmly played by the Singapore Symphony Orchestra in the luxurious acoustic of the Esplanade Concert Hall, will provide an ample dose of sumptuous orchestral sound for many, but for those with a more inquisitive mind, it is the filler pieces on the discs which make this a particularly attractive set.  Filling the first disc (which largely comprises the First Symphony), is the movement of an otherwise stillborn “Youth” Symphony, composed when Rachmaninov was in his teens.  It is full of individual character and with the ghost of Tchaikovsky only occasionally evident; perhaps only the awkward ending shows a lack of compositional experience.  Here, Shui’s invigorating approach, injecting it with sizzling energy and vivacity, reveals a work of real distinction.  The ever-response orchestra includes some enchanting instrumental solos (notably the clarinet) and a brass section which oozes both menace and impressive power; you get the sense that Shui had his work cut out to keep this lot in check.  Immediately after the youthful symphonic movement, Rachmaninov composed Prince Rostislav, which, unlike the symphonies, has a clear and vivid programme – in this case a ballad by Tolstoy telling of a drowned knight awoken by a storm – which draws some wildly imaginative writing from Rachmaninov and some gloriously picturesque playing from the orchestra.  At times one is reminded of Lyadov’s Enchanted Lake in the dark, brooding opening (a fine exhibition of the Singapore bass section), while the timpani and harp as the storm breaks are among the absolute stars of this performance.(and are magnificently captured by Bis’s superb SACD sound).  Shui has a broad vision of the piece, and it comes across as a thoroughly self-assured musical tone-poem.

The Vocalise which squeezes itself in beside the Second Symphony, needs no introduction.  Here it is performed in the orchestrated version Rachmaninov made in 1912.  It turns out to be a magnificent showpiece for the Singapore violins, which expound that timeless melody with a sense of yearning which seems appropriate given the rather bloated feel that inevitably comes from converting a simple vocal exercise into an orchestral showpiece.   The Symphonic Dances provide a singularly apt partner to the Third Symphony; both works written after Rachmaninov had left Russia and settled in the USA.  If the Symphony is an exercise in nostalgia, the Symphonic Dances are rather more obviously looking back (the first ends with an identical setting of the Dies Irae to that which came in the final movement of the First Symphony), and while a kind of mysterious veil hangs over this whole performance (recalling Ravel’s exercise in nostalgia – La Valse), Shui maintains a powerful dance momentum and ensures each instrumental group gets its own share in the limelight.  Perhaps the net result is a little impersonal, but as an exercise in finely blended orchestral colours, this is well worth hearing; and clearly the percussion are having a ball at the end of the last dance.

Attentive readers may have been wondering how three symphonies, the longest of which even when drawn out to its absolute limits still leaves a good 10 minutes to spare on a SACD playing time, can be stretched over four discs.  The answer comes with a collection of Rachmaninov orchestral pieces, none of them really symphonic, which comprises the intriguing fourth disc.  Rachmaninov’s very first orchestral work, Scherzo in D minor, written when he was just 14, shows, according to the booklet notes, “very little personal character”.  If that is so, nobody told Shui or his Singapore players, who invest it with great character and individuality.  True, the light bubbliness of the playing is more Mendelssohn than Tchaikovsky, and glimpses of what we now recognise as Rachmaninov are rare, but this is clearly the work of an extraordinarily talented and self-possessed young composer who, while he may have headed off in another direction, still had plenty of character of his own to put on display here.

Other orchestral pieces on this disc are better known and already well represented in the catalogues, but these are performances which stand comparison with the very best. The Rock, like Prince Rostislav which preceded it by a couple of years, shows off the fine bass section of the orchestra, while the shimmering violins, haunting horn and skipping flute all add delightful splashes of colour, even if  Shui sometimes seems to lose the plot and the performance as a whole moves along rather uncomfortably.  Capriccio bohémien is a somewhat dark piece at the best of times (despite the title), but here it takes on an almost ominous feel with the pounding drums very much to the fore and the gypsy themes feeling as if they are drenched in blood.  The Isle of the Dead does not disguise its intentions, and even Rachmaninov was happy to draw attention to its visual stimulus.  Shui is utterly at home in music which both paints such vivid pictures and explores the full resources of his orchestra, and this is a sumptuously tailored performance, giving ample space to  the numerous solo passages as they emerge from the deep recesses of the orchestra and then melt back again.

It is as pointless a question as it is an intriguing one; what if the Bolshevik Revolution had never taken place and Rachmaninov had lived his entire creative life in Russia?  He would almost certainly have gone on to write a great deal more vocal music (he wrote 87 songs on Russian soil – none on American), and, given his instinctive feel for the dramatic, would probably have gone on to be regarded as one of the major opera composers of the 20th century.  As it is, Rachmaninov completed just three operas, but he began at least three others.  Orchestral music from two of those completed operas completes this fourth SACD.  We have here the prelude to The Miserly Knight in a somewhat jerky performance, although oozing the dark, brooding colours which Shui compellingly reveals, and a suite of orchestral excerpts from Aleko.  These work quite well divorced from the opera, the “Introduction” followed by the “Men’s Dance”, are full of Tchaikovskian bombast and melodramatic gestures delivered with relish by Shui and his Singapore players, a brief “Intermezzo” gives a chance for the Singapore strings to send out waves of gentle muted tone, although wind solos might benefit from a little more care over shaping, while the “Women’s Dance” seems rather faltering as Shui lingers a little too long and lovingly over the sensuous melodic lines.