A Christmas Present for an Organist?

Wanting a Christmas present for an organist?  This would do the trick - it was sent for me to review and here is my review from MusicWeb International. 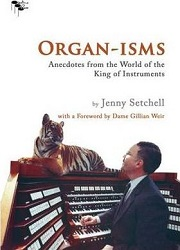 “Can you come to the church, as soon as you like?”  It was a call from the Dean of Derry who had gone to take a funeral at a small church on the other side of the city.  I was cathedral organist at the time and, assuming that the church’s organist had not turned up, I grabbed a black cassock, some music, and headed off to the church where I found a Dean and a posse of concerned undertakers standing around outside.  The deceased, it seems, was a spinster in her late 80s who had been living with her twin sister, who was the church organist and had chosen to play for the funeral.  Sadly, as she started to play, she died.  Not wishing to interrupt the proceedings with news of another death, the Dean had decided to go ahead with the funeral and sort out the second death afterwards.  His instruction to me was “to play as if you are a spinster in your late 80s” and I headed to the curtained-off console where, much to my horror, I found the dead organist laid out beside the stool.  I stumbled through the hymns and drooled octogenarian-spinster-style over the keys until the original deceased was taken out, at which point the local doctor (who was in the congregation) took over.  Afterwards I asked the Dean when he had been aware that the organist had died; “Only a few minutes before the service, when I noticed that she seemed to have been playing the same note for quite a long time”.

Scratch the surface of any organist, and you will find dozens of equally improbable but genuinely true anecdotes crawling around just waiting to be released.  Jenny Setchell has done just that, contacting somewhere in the region of  120 organists scattered across the globe (each of whom is given a short biography at the end of the book) and coming up with a wealth of anecdotes.  The marvel in this book is not the amount of material in it, but the amount she must have discarded to keep it in manageable proportions.  Any organist reading this book will respond to every anecdote in one of two ways: That Also Happened To Me, or That Very Nearly Happened To Me.  The fact is, amusing and entertaining as they are, not one of these anecdotes will seem in any way improbable to organists.  The people who really need to buy this book and learn from it – clergy, caretakers, concert organisers, conductors, brides, and, most especially, brides’ mothers – probably never will, and that is both a bad thing – most anecdotes are the result of basic stupidity from one of the above – and a good thing – it ensures a continually refreshing pool of anecdotes for future generations.

In any book of this nature, where the author’s job has simply been to cobble other people’s words into a coherent whole, there is an absence of clear narrative thread.  Setchell has managed to avoid too much sense of  lurching from one story to another, by mixing up first-hand accounts in the contributor’s words with second-hand retellings in the third person, and breaking the book up into several sections each broken up themselves into themed chapters. The “In Church” section includes numerous anecdotes relating to weddings.  We get a chapter on inappropriate choices of music (the complete Grand Canyon Suite was asked of James Welch, while Adrian Taylor had both to play and sing the Monty Python classic,  Always Look on the Bright Side of Life), although I feel a chapter on the problems of identifying what brides want from vague half-remembered titles or snatches of tune/lyrics might have been entertaining: I was once asked to play “that thing about the Bridegroom coming in the middle of the night”, which I took to be Wachet auf.

Each of chapters is given an amusing title which indicates the general tenor of the anecdotes.  So, in “How to Survive Sermons Without Waking Others”, we get a plethora of all-too-familiar stories about that often interminable moment in all church organists’ lives, when music falls silent for a sermon.  There are several well-established ways of dealing with this (and most organists have experienced all of them).  A popular trick seems to be to interrupt a sermon by making a noise on the organ – Christopher Herrick did it deliberately, while Colin Mitchell spectacularly did it by accident – while others use it as an opportunity to sleep.  One of the best anecdotes in the book concerns Sir John Stainer.  He, too, fell asleep during a sermon, but what makes this anecdote so memorable is the way he so brilliantly covered the fact up.

Jenny Setchell has cast her net far wider than the anecdote-rich waters of the church, and includes a wealth of horribly familiar anecdotes from the world of concert organists.  We get a few additional ones from Gillian Weir, who provides a light-hearted Foreword to the book.  There are terrible stories of being locked out (Paul Derrett tells how he had to move his recital and its audience down the road to another  venue when the original was firmly locked against them), locked in (Massimo Nosetti escaped from an Italian concert hall by breaking into an adjacent house), and left in the dark (Gerard Brooks set off an automatic carillon in his search for the light switch in Trier).

Against such spectacular near-disasters, some of the anecdotes Setchell has included seem a little mundane.  An organist stopping a recital because of cramp hardly seems worth mentioning (although it comes via an old friend, Richard Francis, about whom I have a far better anecdote concerning a capacious academic hood, a crate of empty beer bottles, and a procession up the nave of Bangor Cathedral). Similarly, I imagine you had to be there to recognise the humour of the situation when an organist gave a recital in Japan dressed in “a cute and frilly 18th century blouse with his 20th century evening tails”.   Jenny Setchell had been there, however, for the organist in question was her husband, Martin Setchell, who figures prominently throughout the book.

Of special interest to readers of MusicWeb International will be the anecdotes relating to recordings.  I well recall my own experience of making a commercial recording on the brand new Peter Collins organ at St David’s Hall Cardiff.  Restricted to a single Sunday in cold February to get the whole programme in the can, as luck would have it, the organ played up mercilessly.  In the end, the builder had to sit inside the organ console to operate the numerous stops which, for reasons known only to themselves, refused to operate when I physically pulled them out. It is refreshing to learn that I was not alone; an anecdote concerning Mary Mozelle’s recording at Princeton makes me realise I got off lightly. She had to time herself to record between the sound of heavy machinery operating day-and-night in an adjacent building site, while Graham Barber, recording in Lincoln Cathedral late at night, was seriously distracted by the squealing of bats disturbed by so much nocturnal activity. (Trying a daytime recording in Leeds, Barber came up against a perpetually chirping bird; proving the fact that when it comes to an organist recording, you just can’t win.)

The question is, why are there so many anecdotes associated with the organ and organists?  Setchell explains this in a superbly worded introduction, and throughout, while her personal interjections are few, they offer terrific insights into a dark musical world familiar only to those who inhabit it.  Adorned with humorous drawings from Terence Dobson, thoroughly well indexed, and beautifully produced in a way which means it can be tucked away beside an organ console to provide hours of harmless entertainment – as well as a few warning lessons - during sermons, this is a most entertaining book.  A  welcome read for organists and an essential guide to those who find themselves on the periphery of the organist’s  world.

Posted by Marc Rochester at 7:54 PM