The risk that someone in Singapore might succumb to COVID-19 (so far quite a few seem to have
been infected but nobody in Singapore has died) has left the state in virtual lockdown.  And while most musical events are going ahead as planned, those associated with the National University of Singapore have almost wholly been cancelled.  That means next Friday’s visit of Masaaki Suzuki to continue his Bach Cantata odyssey with the Conservatory orchestra and singers is off.  What a pity. 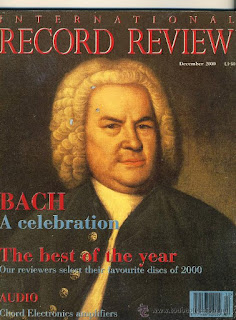 All I can recommend by way of recompense is to listen to his recordings of Bach cantatas with his own Bach Collegium Japan; which, COVID-19 or not, never fails to soothe frayed ends and calm the beating heart.  Walking into the office this morning I picked one at random off the shelf and as I sat luxuriating in sublime music and excellent music making, I wondered where the disc itself had come from.  I could not remember buying it and assumed I had been sent it for review.  Paging through the archives, I eventually found the review I had written back in 2014 for the now very sadly defunct International Record Review.  The prime reason why IRR went to the wall was despite a fiercely loyal readership, there simply was not the money to keep the print run going once its founder and chief financier had died.  It had never had an online presence, its readership clearly preferred the physicality of a print magazine, so without the funds to keep the physical magazine alive, it had nowhere to go but down the drain.  And with it went a huge archive of informed, intelligent and often extremely well written reviews.  A hugely knowledgeable and extremely literate editor ensured quality was always an absolute priority, and going back over the reviews I wrote for it I am conscious of always having had to look over my shoulder to make sure I did not get an editorial rebuke.  What a shame all that has been lost.
I do not think there is an online IRR archive for anyone to mine, so as I listen to this delightful disc I read with a certain pleasure my own review of it published exactly five years ago this month.
------------- 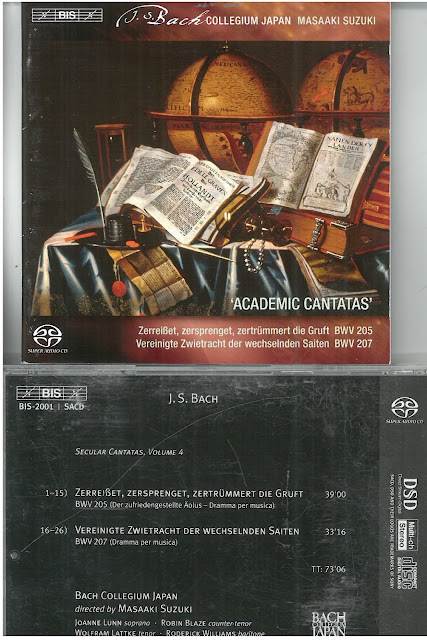 Lavishly colourful orchestral effects, vivid and often extremely witty word-painting, robust humour – almost of the student prank variety – and powerful dramatic gestures may not be the kind of things usually associated with the music of Bach, but in their leisurely trawl through all his cantatas, Collegium Japan have landed two rarely-heard ones in which these elements are very much in evidence.  Both were written for two specific members of Leipzig University and both may well have been commissioned by the university students; indeed Vereinigte Zwietracht der wechselnden Saiten was written to a libretto by a student.  (The other, Zerreisset, zersprenget, zertrümmert die Gruft, is one of the first pieces in which Bach collaborated with the poet known as Picander who was later to create the very different texts of the great Passions.)

The first academic to be honoured by Bach in these cantatas was August Friedrich Müller, 40-year-old teacher of law and philosophy.  He was, by all accounts, extremely popular with his students, and to mark his name day on 3rd August 1725, Bach set a Picander text based on an episode from Virgil’s Aeneid in which the winds have been imprisoned by Aeolus until the summer is over and they can be released with their full force on the world.  Klaus Hofmann’s entertaining booklet notes draw a connection between this summer-based story and the date of the cantata’s performance, suggesting it may have been given out of doors in an evening entertainment.  Certainly this boisterous (there is no other word for it) performance has that unrestrained and straining-at-the-leash feel we might expect from an open-air event.

An orchestra substantially expanded by the addition of three trumpets, two horns, oboe d’amore and timpani – Hofmann sees in this evidence of some very wealthy backers to the performance and it is certainly the widest variety of instrumental colours Bach ever employed in a single cantata – gives Bach a wonderful opportunity to depict the winds clamouring over each other in a bid for freedom.  Possibly it all becomes a little too rowdy and unrestrained in the opening chorus, where loose intonation and rough-edged voicing of the brass jar a little on the ears, but with the second movement things become much more controlled as the winds are magisterially restrained by the awesome presence of a stony-voiced Roderick Williams.  He sounds every inch the mighty King Aeolus, but more than once a mischievous impishness creeps in to his superb portrayal of this powerful being; his laughter in the delightful aria “Wie will ich lustig lichen” brings to mind none other than the late lamented British comedian Jimmy Edwards.

In almost startling contrast comes the graceful and restrained Wolfram Lattke as a gently floating, occasionally fluttering Zephyrus pleading to the king on behalf of all the winds.  His aria “Frische Schatten, meine Freude” is a model of not just vocal restraint but also supreme elegance in orchestral support, the gently wafting individual instrumental lines – including viola d’amore and viola da gamba - lovingly balanced by the gently guiding hand of Masaaki Suzuki.

The second academic celebrated in this pair of cantatas is the youthful (he was just 28 at the time) Gottlieb Kortte, who had just been appointed Professor Extraordinarius.  He delivered his inaugural address (from memory since he had forgotten to bring his text with him) on 11th December 1726, and to mark the occasion Bach composed his Cantata No.207.  The music - especially in the opening chorus – draws heavily on the first “Brandenburg” Concerto, but the libretto was written especially for the occasion, and presents four allegorical characters which Bach apportions to the solo voices.

Happiness is a soprano; and it is hard to imagine a more joyous voice than that of Joanne Lunn as she skips happily around the crisp tones of Honour (the bass of Roderick Williams) in their duet “Denn soll mein Lorbeer schützend decken”. Gratitude is an alto, who is one of the two voices given an entire recitative and aria to themselves.  Here, the alto is Robin Blaze who blends in with perfect ease to the delightful mixture of a pair of flowing flutes and jabbing strings (representing the soft chipping away at marble to create a lasting memorial to the popular professor) in “Atzet dieses Angedenken”.  The other solo voice is that of Diligence, represented by the tenor (Wolfram Lattke).

These are unusually colourful and vivid performances, even by the standards so far set by Masaaki Suzuki’s Collegium Japan, and both singers and orchestra get their teeth happily into some of Bach’s most joyous and gutsy music.  The recording is clean and unrestrained, and once again heaps of praise have to go for the wonderfully enlightening booklet notes.
Posted by Marc Rochester at 8:50 AM