Chinese New Year (and many best wishes to you all for the Year of the Rat) has delayed publication this month, but here are the February events in Singapore’s classical music scene which have come to my attention.

Posted by Marc Rochester at 8:18 AM No comments:

“Listening to Shooby Taylor sing is a shortcut to joy.” What music lover can resist such a statement?  I certainly couldn’t, and it got me hooked on a BBC radio programme which investigated the life and work of “the weirdest scat singer of all time” or, as Shooby styled himself, “the human horn”. 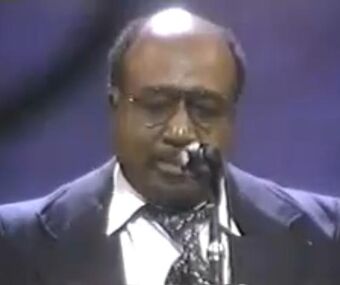 I had never heard of Shooby Taylor before the programme, but as soon as they played a recording of his extraordinary singing I realised that I had heard it before and, at the time, dismissed it out of hand as somebody abusing music, his voice, or merely playing the fool at music’s expense.  Was he taking the mickey (as we once said)?


To begin with, on hearing the programme I remained not just sceptical, but appalled.  It then crossed my mind that the whole thing was a spoof, and nobody in their right mind would make such an extraordinary noise, show such apparent unmusicality or deface standard works of music in all genres so grotesquely.  But then I began to hear things differently.  Here was obviously an extraordinary talent, albeit being used in a silly way, which was clearly not someone just having a joke or pretending to be something or somebody they were not.


Ever since Cleo Laine came to our school in the 1970s and performed to us, I have been a huge admirer of scat singing – that method of improvised singing based on an established melody, that uses non-verbal sounds to propel the voice across a wide range of often incredibly athletic rhythmic and pitch patterns.  When Trinity College London included improvisation as an option in their graded music exams, I foolishly thought I was in for a feast of scat singing from vocal candidates taking what was, as I saw it, the easy alternative to sight reading (which no student singer in the history of music has ever been able to do).  After all, my thinking went, whenever I have worked with singers (and I did spend some time as an operatic repeteteur) they seem to have been more able to improvise freely around what was written than to sing the actual music on the paper.  Yet virtually no singers ever did the improvisation, and those that did nearly all found it impossible to move in any way beyond the basic stimulus given to them in the examination.  Even jazz candidates never even attempted a bit of scat.


The reason for this is that scat singing is extraordinarily difficult, and listening to Shooby Taylor, you realised just how difficult it is.  For a start, there were the vocal sounds.  As one commentator observed, when you listen to him sing, you wonder whether he would soon run out of consonants.  He seemed to have an infinite array of non-verbal syllables at his disposal, all with the obligatory consonant to kick them along rhythmically, and he would let these flow from his mouth without a moment’s hesitation; something made all the more remarkable since, as the programme later revealed, he suffered from a bad stammer when speaking.  Then there was the range of pitches, which often traversed any recognisable vocal range without any obvious switching from a normal voice to falsetto.  And finally there was the amazing ability to think musically on his feet as he ran off with a melodic improvisation prompted by, quite often, a very well-known song.


It was this last thing that initially so disturbed me and others.  Taylor’s trademark style was to superimpose his scat improvisations on pre-existing recordings, and famous songs by, among others, Elvis Presley and Johnny Mathis rather suffered from this treatment.  It really did sound as if he was deliberately distorting them to turn classics into something horribly grotesque.  But his musical fodder was wide-ranging, and I found his superimposed scat singing over Mozart and Mendelssohn far more effective.  Best of all was his free-ranging performances accompanied merely by an electric organ, where, rather than base his improvisation on a set melody or harmonic progression, he merely let fly in the hope that the unnamed keyboard player would keep along as best as possible.  There were bad accidents and nasty clashes, but in the main, the sheer brilliance of his fluent and gloriously confident improvisations sailed over such disasters.


I do find myself torn between admiring his skill and laughing at his outrageous vocal contortions.  Yet, as the BBC programme pointed out, that is all part of the joy.  It really is impossible to hear Shooby Taylor without smiling – although whether that smile is satisfied or ironic is open to debate.  But in a world where we either take music far too seriously and treat it as some kind of museum piece to be preserved in aspic, or disregard it as merely the peripheral fabric to our daily lives, to find a performer who grabs our attention by simply using an outrageous talent to create outrageous musical distortions is a real joy.

https://www.youtube.com/watch?v=wNg8_hgW8Ew
Posted by Marc Rochester at 7:44 AM No comments: