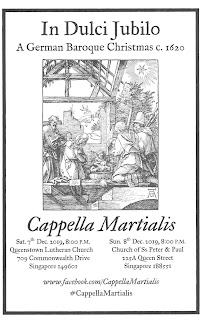 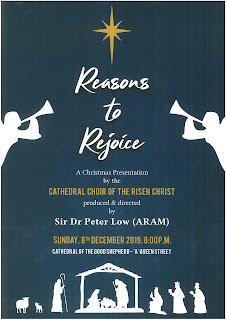 Over the weekend I attended two concerts.  They could have been very similar; both featured well-established choirs, both involved a small band of specialist instrumentalists, both took place in churches and both featured sacred music with a Christmas theme.  There was even  one piece of music common to both.

But in actuality the two could hardly have been more different, and that was largely down to the unique character of their respective choral directors.  Choral directors are responsible for the sound the choir produces and the way they deliver the music, for the musical insight shown in the performances, for the overall choral balance and blend and for the way their choirs address the audience from the stage (and we must consider church chancels as performance stages).  Every Director does things differently, and that personality informs the whole spirit of the concert for good or ill, especially where the Director is a powerful personality.


Cappella Martialis is unique in the Singapore choral scene in being a choir which concentrates exclusively on music from the middle ages to the 17th century.  Their concerts are marked by intense scholarship and a thematic approach which involves a single theme placed in a historical context.  They are proud to describe themselves as HIP (a handy acronym, much beloved by acronym-laden Singapore musicians, for Historical Informed Performance) and certainly much attention is given to pronunciation of the texts and the contextualizing of the music performed (see at the bottom of this post).  On Saturday they were accompanied by a band of period instrumentalists – including violas de gamba, recorders, theorbos and lutes – in a programme recreating, as the concert title had it, “a German Baroque Christmas c.1620”.


Those of us in the know attend a Cappella Martialis concert for the music (and, it must be said, for the magnificently illustrated and beautifully presented programme booklets – a mine of really fascinating historical detail), but not for the quality of the music making.  For one thing Cappella Martialis is not is a polished, professional, technically adept choir: it is a bunch of dedicated enthusiasts whose enthusiasm communicates itself sufficiently strongly to overcome the frequent musical failings of their performance.  On Saturday we had our fair share of collapses, false starts, breakdowns, distorted balance and wobbly intonation (in some cases pitch its very self), at times the musicians seemed unsure of what they were supposed to do next or where they should be standing, and at one point the concert was held up while the organist searched around for his music.  But all that caused little unease amongst the listeners who were lapping up a wonderful and historically informed glimpse of Lutheran music as it was (and, I suspect, as it sounded – warts and all) 400 years ago.


Appropriately the Cappella Martialis concert took place in a Lutheran Church.  However, as we were told in the interesting pre-concert talk (a welcome feature of all Cappella Martialis concerts), the Lutheran Church of 1620's Germany was very different from this clean, modern, warm (hot) and airy 1966 Singapore building (complete with large cockroach which crawled out mid-concert on to the wall above the choir to see what all the fuss was about before scuttling back to its dark harbour), and that rather negated the sense of context which might have come from using such a building. (I found it oddly disturbing that I was sat next to a vast multi-channel mixing desk, implying that the amplification of sound has almost as much significance to Singaporean Lutherans as the visual celebration of God. I hasten to add that the mixing desk was not in use, and the sound the choir and instrumentalists produced was easily audible on its own terms.)


I enjoyed it a lot, as did the large audience, and once again I came away, not so much musically enriched, but with a feeling that I understood a little more about German Lutheran music of the early 17th century.  But one of the Choral director’s foibles annoyed me intensely.  His choir struggled hard and his musicians laboured with devotion to bring the music across to the audience, who responded after each item with plenty of generous and sincere applause.  Yet choral director Yeo Ying Hao studiously refused to acknowledge any of this. As we showed our appreciation he kept his back firmly turned on us and shuffled his music or got his choir to move around as if we simply did not exist.  I found that rude.  And to compound the affront, at the very end when Yeo did, eventually turn round to face us, instead of acknowledging our applause, he raised his hands and flipped his wrists in that kind of faintly dismissive gesture so many Choral Directors have got into the habit of doing so that the singers all bow together.  I hate this.  In the world of orchestral playing, the conductor acknowledges the applause on behalf of his musicians; Choral Directors who so obviously instruct their singers to do the bowing seem to imply that they, as Directors, are in some way above the mucky business of pandering to an audience.  It looks horrible, for not only is the wrist-flipping gesture capable of mis-interpretation as a rude gesture aimed at the audience, but while it may get all the choral heads bowing simultaneously, it does not bring them back up together.  The ensuing staggered re-erection of necks is made all the more ragged by the emphasis on precision in the initial bow.


On Sunday it was the turn of the Cathedral Choir of the Risen Christ which was formed in 1970 and has now grown to become one of the most impressive church choirs in Singapore.  They were on their home turf - the Cathedral of the Good Shepherd – for their traditional annual Christmas Presentation at which, as the years have gone by, more and more members of the diplomatic community have seen fit to attend.  On Sunday night no less than 40 ambassadors, high commissioners, or representatives of various embassies attended, along with a Singapore government minister and a huge, capacity audience.  In honour of these diverse national representatives, the choir sang at least one item in each of the national languages; a feat made all the more remarkable by the fact that they did it entirely from memory and (I was reliably informed by any of the national representatives I met at the post-concert reception) had been trained to get the pronunciation and accents just right.  By request, apparently, they had been asked not to sing in Ukrainian, and since Kazakhstan appears to have no suitable Christmas music of its own, a piece of Gregorian chant sung in Latin was used instead; much to the considerable amusement of the country’s ambassador and his loquacious wife, who were sitting right in front of me.  Also in front of me was the South African ambassador who clearly loved every single minute of the presentation and seemed almost uncontainably enthused by the choir’s wonderfully invigorating singing of a song from his own country (Bayété!, Bayété! – I’m not sure in which of the South African languages that is).  As if the huge musical repertory (64 individual pieces sung over the course of two and a half hours) and range of languages was not enough, most were performed with some suitable prop and/or costume, and often with some exquisitely choreographed dancing from a choir which showed themselves not just to be musically adept but tremendously accomplished all-round-performers.  This truly is a wonderful choir, capable, talented, musical and drilled to  state of near perfection by their dedicated and deeply committed Choral Director


The first half of the concert was a celebration of Singapore’s bicentenary (why is everyone calling it a “Bicentennial”?) and this was where some of the more “serious” (for want of a better word) music was presented.  There was a wonderfully buoyant performance of “God rest ye Merry Gentlemen”, a searingly gorgeous performance of Poulenc’s Quem vidistis and a surprisingly moving performance of Andrew Lloyd Webber’s Pié Jesu.  I was deeply impressed by a beautiful Irish carol (“Carol from an Irish Cabin”) by Dale Wood which I had not heard before, despite having spent six unforgettable years living in Ireland, and I even found the obligatory performance of Dick Lee’s “Home” quite touching.  The towering success of the first half has to have been an absolutely riveting performance of Adiemus by Karl Jenkins which transcended the usual glib rhythmic delivery and became something of real musical substance.  Other gems from the concert included a rich performance of Rachmaninov’s Bogoróditse Dyevo, a lovely performance of the Swedish Santa Lucia, a magical performance, complete with dimmed lights and ersatz candles, of Stille Nacht, and a hugely effective Jordanian carol Ya Mariamo el Bekro fokti.  Germany was represented by Praetorius’s Es ist ein Ros in a performance as polished and historically inauthentic as Cappella Martialis’s performance of it the night before was not. Among the instrumental support were various ethnic instruments from south east Asia which proved to be hugely effective, even out of context, and the whole presentation was adorned by a continually changing series of PowerPoint slides projected on to the wall behind the choir.  No space for any cockroaches here! Among the large and intensely loyal choral members are a body of really young singers obviously well below the age of 8; under which, according to the concert notices, no child was to be admitted.  While this handful of tiny children elicited the necessary “ah” factor from admiring adults, they actually delivered their solos (in very strange languages from them) with impressive confidence and security.
Choral Director, Peter Low is supremely gifted  in the art of stage presentation, and the fact that this was such a slick, polished and absorbing performance which ran without a single obvious hitch, is entirely down to his leadership.  But he is not without his own minor but nevertheless irritating and distracting foibles.  He has an almost obsessive sense of performance control which occasionally becomes counter-productive; attempting to slow down the person announcing the members of the diplomatic corps in procession, he waved his hand so grandly that it stopped one ambassador in his tracks.  Low is too accomplished a choral director and performer to make the mistake of waving his wrists about to get the choir to move collectively, but his way of doing it is equally disturbing; he claps his hands sharply.  The first time I heard this I thought he had lost his temper and was admonishing an errant singer - and I lost the next few pieces in the performances while I strained my memory to try and work out who and what had gone wrong.  It eventually dawned on me that it was his way of getting them to move together, but in a concert, like this one, which celebrates peace, this almost rifle-like retort is deeply disturbing.  Perhaps a little bell would achieve the same effect on the choir with rather less of a disturbance to the audience; and would turn a necessary instruction into an integral part of the performance.


Choral Director foibles aside, both concerts were in their own way hugely impressive, and I only wish I had seen in the audiences more of Singapore’s musical fraternity (although a notable presence at the Sunday event was Singapore's great musical luminary, Bernard Tan - whose lovely setting of "The Peace of God" was included in the concert).  They would have learnt something from both, be it an insight into 17th century German music or 200 plus years of Singapore history as revealed through music.
Posted by Marc Rochester at 11:22 AM