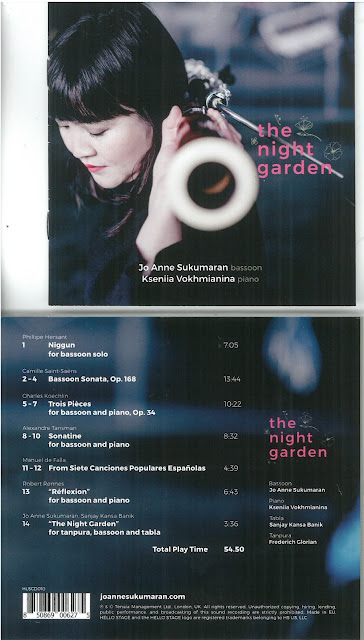 Stravinsky suggested that the bassoon solo which opens The Rite of Spring should be put up a semitone every year so as to retain its ability to frighten bassoonists and create a sense of unease.  Nobody does this (that I know of) but French composer Phillipe Hersant has gone some way down that path with his Niggun for solo bassoon, which seems to be an atmospheric reflection of Stravinsky’s solo coupled with all kinds of weird and wonderful effects which stretch the bassoonist’s technique to its limits but do rather get in the way of the music.  Introducing her debut album with Hersant’s daunting solo, Jo Anne Sukumaran, who styles herself “one of Singapore’s leading bassoonists”, shows that, if nothing else, she possesses as secure a technique as anyone, and while she conveys the sense of strain which Stravinsky – and, I imagine, Hersant – was after, she clearly has plenty of technique in reserve not just to play what is written but to make some kind of sense out of it.  In all fairness, the Stravinsky connection is one I draw myself; Hersant himself has built the piece on a Hasidic Hebrew song with the bassoon intended to “imitate the inflections and soulful quality of the human voice”.  Whatever you take from this seven-minute demonstration of bassoonism, the one unarguable truth is that Sukumaran delivers it with complete assurance.


As had Debussy before him, Saint-Saëns set out to write a sonata for every wind instrument but died before he could complete the project.  The last of these Sonatas was for Bassoon and Piano and dates from 1921; seven years after Debussy started on – but did not complete – a sonata for bassoon with clarinet, trumpet and piano, and only a few months before Poulenc wrote his Sonata for clarinet and bassoon.  The gentle, graceful and elegant musical language belies its relative modernity (let’s not forget this is a work written less than 100 years ago, so is firmly rooted in that fake stylistic period ill-taught music students and their ill-informed teachers like to label “20th century”) but transcends the fickleness of taste by being beautifully written for the instrument and masterfully combining impressive virtuoso display with real musical integrity.  Again, the virtuoso demands are amply met by Sukumaran, even if, at times, she seems to rely on her magnificent pianist, Kseniia Vokhmianina, to convey the musical substance – it’s as if Sukumaran deals with the individual technical features while Vokhmianina gels it all together.  I suppose this is evidence of an ideal partnership – complementary rather than duplicatory – so it is not something which detracts in any way from the overall performance.


With the exception of a flowing, eloquent, but ultimately uneventful piece of mood-painting, aptly titled Réflexion, by the Norwegian bassoonist Robert Rennes, France is very much at the core of this recorded programme.  In addition to the Saint-Saëns we have a Sonatine by the Polish/French composer Alexandre Tansman, three pieces for Bassoon and Piano by Charles Koechlin (whose musical life effectively began during a period of convalescence in Algeria, which may account for a certain exoticism in his music) and some Popular Spanish Songs by the French-trained Spanish composer, Manuel de Falla.  All of these are played with great precision and a strong feeling of security with Sukumaran’s impressive security of technical command complemented by Vokhmianina’s graceful pianism.  Why such Francophilia?  The answer seems to lie in the player’s own musical taste – she certainly seems to be quite at home in this early-20th century musical idiom, where the emphasis seems to be more on creating a mood than grandstanding expression or high drama.  But there appears to be nothing French in Sukumaran’s background – the nearest her biography gets to France is mention of a period studying at Lugano in Switzerland – and it is her Indian roots which she seems proudest to celebrate in a work which was specially written for this recording and gives the album its title.


Night Garden is a joint composition by Sukumaran and the tabla player, Sanjay Kansa Banik.  If, on paper, there might seem to be some kind of cultural and musical chasm between a Bassoon, Tabla and Tambūrā (the long-necked lute that makes that wonderfully buzzing drone noise which underpins so much Hindi music) in reality the combination works perfectly, the bassoon in effect revisiting its role in the opening Niggun as an imitator of the human voice rather than an instrument in its own right.  There is, however, a major problem with Night Garden.  Once it has started and created it effect, it simply stops, providing not so much a thoughtful and original experiment in this combination of instruments as a tiny, almost picture-postcard image of an attractive but ultimately sterile east-meets-west portrait.


As a debut disc this does what it should do; it presents a fine player in an attractive programme which makes one want to hear more of her.  As a musical presentation, it has a slightly superficial feel to it, and one hopes that when one does hear more of Jo Anne Sukumaran, it will explore more of her musical personality and individuality and possibly dig deeper into the obvious strengths she has both as a bassoonist and as an insightful musician.
Posted by Marc Rochester at 9:32 AM