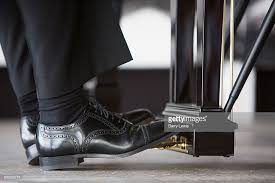 A memory which has stayed with me since the very early days of the Malaysian Philharmonic Orchestra was of a complaint received after one of the very first concerts in the newly-opened Dewan Filharmonik PETRONAS.  Please, the complainant wrote, can you ensure that the violinists clean their shoes before going on stage?


Here we were with a brand new orchestra in a brand new hall bringing classical music to a city, a country and an audience which, in the main, had not experienced anything like it before. And what were the audience most concerned about?  Footwear!  It caused us a certain amount of amusement and incredulity.  But then someone had the bright idea of sitting in the concert in the same seat as the complainant had used (the complaint forms asked patrons to tell us their seat in anticipation of some issues concerning sight lines, audibility or comfort) and realised that in the direct line of sight were, indeed, the first violinists’ feet.  In fact, in the front few rows of the hall, all you could see without actually straining back to peer upwards, was the stage floor and that part of the violinists’ anatomy which went as high as the low shins.  With nothing else to see, little wonder that players’ footwear assumed disproportionate attention.  An instruction duly went out to ensure that shoes were immaculate before each concert.


Ever since then I’ve taken an interest in musicians’ footwear, and am delighted that so many orchestral players have now gone to patent leather, which shines so brightly and requires just a rub over with a duster to remove any unsightly blemishes.  However, it does not usually concern me, largely because I will never sit in the front few rows of a concert hall where players’ feet are, as it were, thrust at me due to the sight level of the stage from these seats.  There are those who like to sit up that close, but you can neither see nor hear properly, so I assume they are either foot-fetishists or egotists who like the rest of the concert hall to know that they are there. (Which is why, I assume, most late-comers have booked seats in the front row in the middle, where they can make their disturbingly late entry in full view of the assembled crowd.)

However, I was the guest at a concert over the weekend where I had no choice of seat, and found myself thrust right in the middle of one of the very front rows.  It was a terrible experience, and I took the first opportunity to nip to an empty seat I had spotted at a more realistic distance from the stage.  But for the time I was sat at the front, I found all I could see without straining my neck muscles uncomfortably, was the players’ feet.  It was a piano recital in which four different pianists took it in turns to come on and play.


There was one player whose black, lace-up shoes were highly polished, whose long black socks disappeared into the comfortably loose legs of his black trousers.  I liked this; it gave authority and distinction to the performances I could hear coming from the instrument.  There was another who had fairly clean if matt-finished black shoes, but socks of such minitude that I found myself staring at a bare expanse of ankle/lower leg before a tight trouser-leg hid the rest from view.  A third had clean enough shoes but oddly patterned socks which struck a discordant note with the black trousers, which seemed to have been applied with a spray can.  The fourth was astonishing.  From the high point at which his black trouser legs stopped, it appeared that he had long outgrown his suit (or borrowed one from a children’s store).  He wore tiny orange socks and bright brown shoes, which were so visually disturbing that I found it difficult to take his playing seriously.  So much bare, hairless ankle and leg were visible that  I wondered whether he had spent his pre-concert preparation waxing his legs, when I should have been concentrating on the music I could hear him play.


As I scurried to my better seat near the back, where such visual distractions were negated by the totality of my vision of the stage, I reflected on the whole subject of musicians’ footwear.  Inadvertently, I had been affected in my opinion of these players by what they were wearing below their trouser legs, and, indeed, on where the trouser legs had stopped.  For the first time, I really could appreciate how our Malaysians correspondent had been so disturbed by dirty shoes.  Fashion on the street or in the dance hall is all very well, but a concert hall, were the musicians’ demeanour should be entirely focused towards projecting the musical message, is no place for fashion statements in the foot department.  I say; ban bare legs and ankles, ban coloured socks, ban brown or dirty shoes, and, most of all, avoid any hint of showing bare skin below the waist.  Unless, of course, you are Yuja Wang where from any vantage point, the view is interesting! 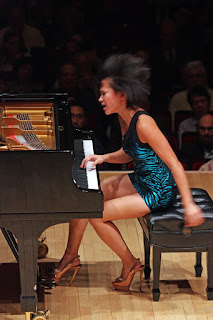