Having clearly whetted some appetites (and got someone in Baltimore on the warpath over some questionable content in the concert's programme), I give here the original version of my concert review, published in today's Straits Times. 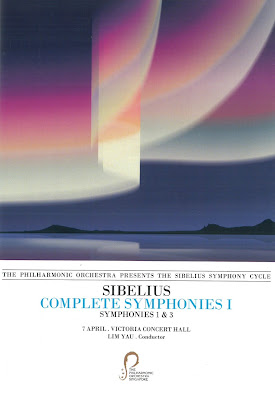 They completed their run of the complete Beethoven symphonies a few months back, so Lim Yau and the Philharmonic Orchestra have now turned to Sibelius and a year-long series performing all seven of his symphonies.

There is some sense in following Beethoven with Sibelius - even if you miss out such significant 19th century symphonists as Mendelssohn, Schumann, Brahms, Dvorak and Tchaikovsky - since Beethoven’s and Sibelius’s Firsts were, respectively, the first and the last major symphonic premieres of the 19th century.

Lim, however, chose not to start this Sibelius cycle with the First, but launched straight into the Third Symphony.  A sensible choice, since the Third is Sibelius’s most accessible symphony, brim full with great tunes and glorious moments.  In the first two movements the Philharmonic Orchestra were producing some fabulous playing, and Lim was inspiring them to impressive heights of excellence.

It was neither entirely the orchestra’s nor Lim’s fault that the third movement often seemed rather shambolic.  You get the impression that Sibelius got a bit bored after producing such wonders earlier in the symphony, and it ended decidedly lamely.

Never mind, high ranking professional orchestras and top-flight conductors have come to grief over Sibelius symphonies, so it was to their eternal credit that these Singapore musicians not only produced very creditable performances but showed some glimpses of a real affinity with the music.

Every section of an orchestra is projected in a Sibelius symphony, and strengths and weaknesses are cruelly exposed.  The Philharmonic Orchestra were certainly producing some top-class playing here, but in the First Symphony, which followed the interval, a couple of weaknesses were revealed.  A little more time spent tuning the wind on stage would not have gone amiss, as things were very ugly for a moment in the second movement, while a serious shortage of cellos was the one obvious indication of an orchestra which does not play in public with any real frequency.  Given the lovely collective violin and viola sound and a disarmingly powerful double bass one, a couple more cellos at least would have given a wonderful richness to the string sound.

Lim’s direction had the great benefit of purpose and fluency, and where things wobbled, he kept them on the straight and narrow, and where things shone, he did not hesitate to give extra lustre through an expansive approach to dynamics.  Great big climaxes and intimate little passage of self-reflection brought the symphony vividly to life.

Symphonies 2 and 4 will be in the next instalment of this series, and while you will have to wait for October for that, the wait will certainly be well worthwhile.
Posted by Marc Rochester at 1:00 PM