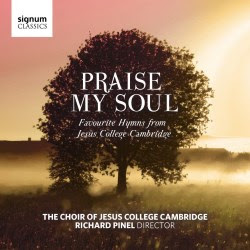 This is subtitled “Favourite Hymns”, but the issue of what is a favourite and what is not is entirely subjective. Many of us have our favourite hymns and will bemoan their absence from this CD; even now I can see the “customer reviews” flooding the online sellers’ portals listing all the hymns that the individual writers of such things feel ought to have been included. Such an activity is utterly specious; in an hour’s programme you cannot hope to do anything but very lightly scrape the surface of a vast and almost bottomless resource.

As it is, Richard Pinel and the choirs of Jesus College Cambridge have come up with a well-varied programme combining some stirring words and some fine tunes, ranging from the 16th to the 21st centuries. But not everything is beyond reproach, the inclusion of the Ode to Joy from Beethoven’s Ninth Symphony sung to words which sound more like a nature trail than a hymn, simply emphasises what a lousy hymn tune this makes, and it certainly seems odd to have that splendid tune by Cyril Taylor, “Abbots Leigh”, sung to unfamiliar Marian words from the 20th century writer G B Timms. I’m not sure that, wonderful though the tune is (“Cuddesdon” by William H. Ferguson), Christopher Idle’s precis of the Gloria (“Glory in the Highest”) will be widely known even to the most ardent hymn singing communities, and I certainly had never before heard “How Shall we Sing Salvation’s Song” nor the tune to which it is sung here (“Llangarron” by David Manners); my loss, both are absolutely magnificent and have instantly found a place in my personal pantheon of favourites. Other more established personal favourites are here (“For the Fruits of his Creation” sung to Francis Jackson’s splendid tune “East Acklam”) and “All my hope on God is founded” (sung to Herbert Howells’ excellent “Michael”, although sadly not with the composer’s own spine-tingling final verse re-harmonisation and descant but with a much less impressive one by John Rutter. And with “Eventide” (“Abide with me”), “St Anne” (“O God our Help in Ages Past”), “Crimond” (“The Lord’s my Shepherd”), “St Clement” (“The Day Thou Gavest”), “Nicea” (“Holy, Holy, Holy”), “Petra” (“Rock of Ages”), “Monk’s Gate” (“He Who Would Valiant Be”) and “Rockingham” (“When I Survey the Wondrous Cross”), there are undoubtedly a great many universal favourites here.

What is important though, is not so much the choice of hymns as the fact that the entire disc is devoted to hymns, that the hymns are sung robustly and with great attention to detail, and that they are delivered in a straightforward, no-nonsense manner with firm organ accompaniments featuring judicious use of re-harmonised and descanted last verses. Where some interpretative licence is taken to vary the choral sound, it is done with great taste. Perhaps the delivery of the canon for “Tallis’s Canon” (“Glory to thee, my God”) is a trifle too obvious, but I particularly love the innocent-voiced trebles, Theo Amies and Tobias Fitzgerald, who perfectly convey the essential simplicity of Gibbons’ “Song 46” and the introspective character of the text “Drop, drop slow tears”. I also find George Raikes’ baritone solo (against a hummed chorus) in the fourth verse of “Abide with me” most effective. There are two choirs associated with Jesus College – the men and boys Chapel Choir and the mixed voice College choir – and it is impressive how unified the tone is, the bigger College Choir singing with such supreme sensitivity in Crimond that this somewhat over-stretched Scottish tune is delivered with real distinction.

I have long argued that hymnody has been one of the greatest contributions to the literature of music from English composers, and it is high time it was more widely celebrated, now that hymn singing itself seems to be a dying art in English churches (and has long since died a death elsewhere in the English-speaking world). All praise and glory, then, to Ricard Pinel and his gloriously full-voiced Jesus College choristers, not to mention his two instinctive and sensitive organist scholars, Jordan Wong and Dewi Rees, for creating this magnificent disc of fine hymn tunes, stirring words and outstanding music making. I hope it helps preserve a uniquely British musical genre and to increase awareness of it among those for whom hymn-singing has never been seen as a legitimate musical activity nor an entirely credible sacred one.