Professionals Play them, but can the Public Sing them?

There's a seminar coming up for organists in Singapore on the art of accompanying hymns.

It is certainly something that needs to be taught and, indeed, something which needs serious consideration; and while it's something I do cover in my organ classes, I am aware that for many organists it is seen as an insignificant part of their art.  When there are Trio Sonatas to learn and French Toccatas to master, learning how to play a sequence of simple four-part chords over and over again must seem very mundane.

Yet, for church organists (and, despite the fact that this is a dying breed, it still represents a majority of those who play the organ) it is not so much their core repertory as the most important thing they do.  Hymns are the musical lifeblood of sung Christian worship and are, for many people, their sole exposure to live music-making.  Ask people if they sing and they will tell you that they don't "other than in the shower" - yet those same people often sing hymns each Sunday at church.  The problem is they do not equate the singing of hymns with either music or the physical art of singing.  In short, hymns, despite their ubiquity in church life, are usually treated with the same inconsequence as breathing : we all do it, so what's so special about it?

In my days as a cathedral choirmaster and organist, hymns were chosen with great care (it was my task to choose them), paired with appropriate tunes, and rehearsed over and over again.  The presentation of a hymn within the cathedral service was approached with all the seriousness of a professional performance.  I knew the hymn lists for the past years, and when I introduced a new tune or hymn, I would ensure that the congregation was properly led by a full verse play through and a strong solo stop for the first verse or two.

When I visit my father's church in England, hymns are the high point of each service.  They are robustly sung by the congregation, aware that the church's once spectacular choir has just about ceased to exist and determined to make good the vocal shortfall.  The organist throws his all at them, often adding a gloriously theatrical flourish to the final verse, registering each verse independently, tracing the texts word by word as he accompanies them, ensuring the music follows the same punctuation patterns and taking care to single out the melodic line in cases where the tune may not be too familiar to the congregation.

Here in Singapore, however, a combination of the pervasive influence of the American protestants and their obsession with populism, and a determination to expunge the last vestiges of Colonial influence, has led to a collapse of hymnody even in the established churches.  Worship songs, with their mawkish lyrics, their unsingable melodies and their self-indulgent music support groups which enjoy the weekly opportunity to dust off their electronic devices and pretend to be fifth-rate failed rock-bands, have become the norm.  Traditional hymnody, known (if not necessarily loved) by all, has lost its ability to unite a congregation musically through a shared knowledge of tune and words.

The church I regularly attend in Singapore still trots out a traditional hymn or three at each service, but rarely with the original words and never in their entirety.  If we get two verses of a great hymn we are lucky - usually it's just one with a heavily simplified text.  As a result as I lustily sing out from my seat in the congregation, I am aware that all around me is silence.  One or two earnest people join in, but the vast majority stand there as spectators, possibly thinking it is the job of the choir to do the singing while all they need do are the hand gestures.

I am conscious of an embarrassment when it comes to hymn singing.  People don't like to sing in public and they find the texts difficult.  My father's favourite hymn includes the words "Consubstantial, Coeternal" - words which roll off the tongue but whose meaning is only revealed after much thought.  Why do we aim for the easy, when the difficult has much more lasting impact?  How many people after a service greet the priest at the church door and ask for an explanation about an obscure phrase in one of the hymns?  When that happens, enlightening conversations on key parts of liturgy and faith can quickly ensue to the benefit of all.

So, if we are to preserve the vital art of public hymn singing and, possibly, revitalise it, we do need to teach our organists how to accompany hymns.  Accompanying hymns involves a deep knowledge of the texts and their meanings, and organists should read and recite the words before they look at the music.  Accompanying hymns involves knowing what the congregation expects, and being able to lead them along new paths - it's a different skill showing someone the way when you already know it but they do not, than it is accompanying them on a path they know well themselves.  And accompanying hymns involves inspiring and colouring through imaginative and fluent use of the organ's resources.  A few drum effects added and the odd electronically-induced bass note simply serves to distract, not enhance; so when it comes to hymns, get rid of the supernumerary instruments. 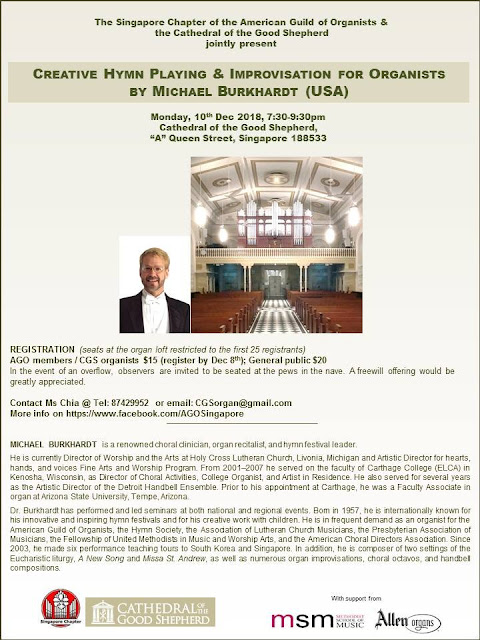 I shall not be around for the seminar, but I wish it well; and if it both encourages an increase in awareness of the value of hymnody as well as the quality of its performance, it will be time well invested by those who attend.

What it will not teach, sadly, is how congregations should sing hymns.  Perhaps we are  overdue for a few seminars on this.  Having discarded our heritage of hymns, it will take a lot of work to claw it back.  But it will be work well spent.  A few sessions on historic hymns and their value and relevance to today's church-going society would not go amiss.
Posted by Marc Rochester at 8:18 AM