One from the Tudor Archives 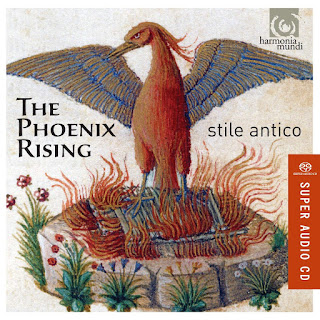 A good friend urged me to seek out and listen to the group called Stile Antico and even bought me one of their CDs to convince me!  I was duly impressed and when, in 2013, the sadly-defunct International Record Review sent me a new release from them for review, I was happy to share my friend's enthusiasm for them.  The original review popped up the other day and I felt it was probably worth resurrecting; the disc is still available:


Tudor church music is so embedded in the repertoire of choirs of all shapes and sizes that it is hard to believe that it has not been there for centuries. The fact is the sacred music of Byrd, Gibbons, Tallis et al appeared in practical performing editions only in the 1920s and even then took a while to establish itself. It was a project financed by the Carnegie UK Trust, which, as Matthew O’Donovan points out in his booklet notes, ‘was to transform the musical life of the whole nation’. Between 1922 and 1929 Carnegie funded Tudor Church Music, which over ten volumes published for the first time many of the great Tudor masterpieces which have become so familiar to us today. That there was an appetite for this music in those inter-war years is evidenced by the fact that within eight years of its publication, Byrd’s Ave verum corpus had sold staggering 16,629 copies; that it remains as popular today is evidenced by the fact that one UK online retailer lists no fewer than 46 currently available recordings of the work from performers who range from church choirs, through most of the major English cathedral and collegiate choirs to specialist singing groups from across Europe and the US.
Here is a forty-seventh disc to add to that list and it is unquestionably one of the best.

Stile Antico, a relatively new player on the block, formed in 2001 , has already established itself as a leading group in the Early Music vocal arena, and this is only the latest in a long line of extremely impressive discs released on the Harmonia Mundi label. Its collective (conductorless) approach pays particular dividends in this repertoire where the music depends on an instinctive reaction from the individual singers rather than a sense of order created by a firm hand on the tiller. Nowhere is this more obvious than in Gibbons’s O clap your hands, where the sprightly rhythms here have an appropriately percussive edge while the occasional false relations have a spine-tingling spiciness brought about by clashes which feel as if they happen by accident rather than design. Clarity of texture, driving tempos and superb diction are all there, but what is more vivid is the glorious freshness and vitality of this singing.

This is a disc which might have done well under such a title as ‘The Golden Age’s Greatest Hits’ (thank goodness Harmonia Mundi did not go down that road), for everything here is hugely familiar to just about anyone who has dipped a toe however tentatively — into the realms of English church music. Byrd’s great Mass for five voices is here, effectively diluted by being interspersed with various other pieces (highlighting the emphasis on the music rather than the texts), and alongside it are some of the best-loved motets of them all. It makes for an ideal single-volume compendium of Tudor church music.

The term ‘Tudor’ is perhaps a little misleading since the pieces here span a period of some 120 years stretching into the Jacobean period. But whether the music is early (the earliest piece is Taverner’s O splendor gloriae, with its transparent textures and extensive use of imitation) or late (the exquisite Almighty and everlasting God, a standard for many English parish churches during the latter half of the twentieth century) Stile Antico presents it with a glorious and compelling freshness. The result is not merely a wholly justified celebration of the foresightedness of the early editors of Tudor Church Music (who, interestingly, did not include the one name most of us associate with the revival of Tudor church music at the time: R. R. Terry was dismissed from the editorial board before the first volume was produced) but also a powerful reappraisal of repertoire which has become so popular we now almost take it for granted.

Add to this excellent singing, a splendid recording made in St Jude-on-the-Hill, Hampstead Garden Suburb, London and a beautifully produced booklet, and we have a release which in its own way is quite as wonderful as the original Carnegie-funded editions.
Posted by Marc Rochester at 9:19 AM