Mahler gets the Byrd 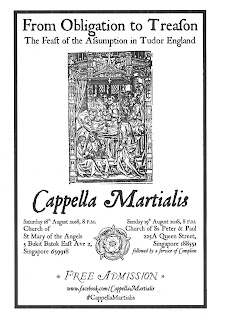 If the musical health of a city is gauged by the number of concerts it hosts, then Singapore is in robust musical health.  Most days of the week something is happening on the classical music front, and at weekends the diary can get very crowded indeed.  This last weekend was a typical example, where very difficult choices had to be made about what to attend and what to miss.  There was a big Mahler event taking place on Saturday, and I imagine most Singapore music-lovers gravitated towards that.


Not me.  I chose to give Mahler a miss and took the bus up to a remote hill-top monastery in Bukit Batok to hear some Byrd.


The alliteration certainly attracted my attention.  After all, as regular readers know, for me, alliteration absolutely always attracts attention – the concept of taking the Bukit Batok Byrd Bus was linguistically irresistible.  But what really swung my choice in favour of Byrd was that Mahler symphonies are performed with such frequency in Singapore that I have reached saturation point – I think I could go to my grave quite happily now without ever hearing another Mahler symphony. I’ve heard Mahler 2 more times over the last decade in Singapore than I did in my entire previous existence, and much as I like the work, a little over-indulgent emotional excess can go a very long way indeed.


I count the music of William Byrd among my most absolute favourite.  I checked my personal record collection just now, and discovered I had more recordings of Byrd than of any other single composer.  I was probably around five or six when I first encountered Byrd.  Since then I have sung Byrd, accompanied Byrd and conducted Byrd.  When I was in England I reckon I heard Byrd at least once a week.  But in Singapore Byrd is rare, and when you do catch some, it is always a moment to savour.  I hear it from time to time sung liturgically in the Cathedral of the Good Shepherd, but despite a plethora of choirs in Singapore, few are either willing or able to tackle Byrd.  After all to sing Byrd properly requires a particular level of intellectual insight and musical wit, and I’m not sure the current pool of American-trained, soft-core-pop-orientated choral directors possesses that sort of insight or wit.


Cappella Martialis is a small group of like-minded enthusiasts who specialise in singing the kind of sacred and liturgical music which forms the very foundations of modern choral singing.  They may not do it particularly well technically, but they do it with love and sincerity, and that, to me, matters far, far more than having every little detail perfectly manicured.  On Saturday more than once things seemed on the brink of collapse as a voice or two fell by the wayside, as tuning sagged, balance wobbled dangerously and stability of pitch was a very rare commodity. (Why do choirs here seem so terrified of pitch pipes?  Surely it’s better for the singers to hear their pitch blown clearly and steadily, than to wait for a single member to pluck a starting note from a tuning fork thrust against an ear-lobe?)  But there was a powerful feeling of collective involvement in the spirit of the music which easily overwhelmed these technical flaws.


When I had last seen Cappella Martialis perform, they had rather spoiled things with a stage manner which reminded me of nothing other than a flock of sheep in a field determined to avoid the ministrations of the guiding sheep dog.  Things had improved beyond measure for this performance, and as a stage presentation, it had a good sense of occasion and a feeling that it had been, at the very least, thought through.  There did seem to have been a little pay off in quality of singing, and the conductor’s single-minded obsession with beating time and keeping the singers together meant that everything sounded as if it was being sung by a group of individuals jogging around the athletics track – a notion reinforced by the very obvious beating time from singers with both hands firmly affixed to copies.


But if on a purely technical level the singing lacked polish, and there was a lurking suspicion that it simply had not been rehearsed thoroughly enough, there was absolute sincerity and conviction in this singing which transcended everything else in the performance.  It had the power to move and inspire; it was not a pretty sound but it was dazzling in the beauty of vision it conjured up in the listener.


Perhaps the most impressive thing here, though, was the obvious amount of deep and thorough research which had gone into the programme.  Cappella Martialis programme booklets  are a work of art, full of fascinating historical insight, beautiful and carefully chosen illustrations, and so much information, that they are best read at leisure (which is why, I assume, they send out the programme booklets in advance to the audience).  They are also privileged to have among their number a fine scholar who delivers fascinating, enlightening and intriguing insights to set the music in context before each part of the concert.  Among the gems he offered up on Saturday night was the thought that we were hearing music which was not just written as an act of rebellion, but as one of treason.  He drew our attention to little coded messages and signs in the music; and I have to confess to having become so familiar with these works that I had never stopped to think much about either their context or these coded signs.  When the choir sang the word “Catholic” in the Credo from the Mass for Four Voices, suddenly moving into chordal harmony and repeating the word, the incredible bravery and political risk Byrd was taking was revealed in all its amazing glory.


Here was a concert which conclusively showed that, if the music is good enough, we do not need a polished, technically flawless performance to convey its meaning.  All we need are people who both understand and love what it is all about, and we certainly had those on this occasion.  My decision to give Mahler the Byrd on Saturday was thoroughly vindicated. 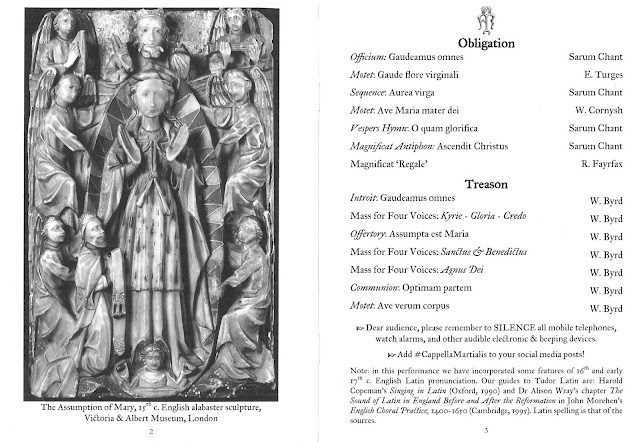 Posted by Marc Rochester at 2:26 PM