I enjoyed this CD which I reviewed for MusicWeb International.  Here's my review - and you can order it from them. 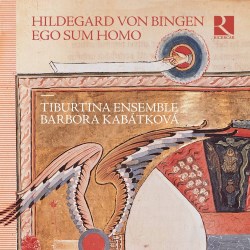 Considering she lived almost a thousand years ago and stands as one of the first composers in musical history whose name can be unquestionably attributed to specific and original musical works – she composed 77 settings of her own mystic visions - we know a surprising amount about Hildegard von Bingen.  We know about her family, her early days in a convent, the window out of which she looked on the world (and through which the world looked at her), her dealings with the religious and temporal leaders of her age, her remarkably persuasive and, as we would call it today, entrepreneurial abilities, the places she visited, the people she knew, the ideas, thoughts and opinions she had and, of course, the mystic visions which led her not only to set them to music but to commit the music to  manuscript and thus to posterity.  What we do not know is how that music was performed in her own time, what it sounded like then and how contemporary listeners and performers responded to it.


It is a common failing among those who attempt “authentic” performances of music to authenticate them only in terms of physical instrumental attributes and notions of pitch and tempo.  In other respects, such performances all too often assume 21st century concepts and ethics as being constants throughout the ages, and wrap up historical evidence in sounds designed to meet the expectations of 21st century ears rather than those of earlier times.  In the case of Hildegard, we only have those 21st century ears to go on, so this is not a recording which in any way attempts to address the issue; there is no pretence that these are in any way aiming at an “authentic” performance style.


Ask any member of the general public to describe classical music and very soon the word “beautiful” will crop up.  Otherwise intelligent and logically-minded people will often go weak at the knees in the face of old classical music and coo lovingly about its beauty and its calming effects.  It is rather sad that great music is so often reduced to superficial notions of beauty – like the assessment of a woman as beautiful rather than as a living, breathing, thinking, and complex human being.  That feminine analogy is singularly apt when dealing with Hildegard, for it is often difficult to assess her as a composer without having to wade through acres of feminist ideologies.  Barbora Kabátková’s booklet notes with this CD are no exception, and highlight the concept of women relegated to an inferior status to men since the days of Eve.  Without wishing to get into feminist arguments, I would only say that such arguments only serve to diminish the extraordinary achievement of Hildegard, not in being a woman in a man’s world, but in being a composer in a world where composers did not exist at all as individuals.


The Tiburtina Ensemble comprises nine women’s voices which blend beautifully in this sequence of carefully selected extracts from Hildegard’s Visions.  While they trace with immaculate precision the musical fabric of Hildegard’s creations, a trio of “old-testament instruments” – two harps and a zither (or dulce melos) – provides an improvised accompaniment, as well as a couple of purely instrumental interludes.   With the aid of a misty acoustical environment, a perfectly manicured vocal tone, delicate and ethereal improvised instrumental support – often tinkling away in the background like so many wind chimes in an ornamental garden – and a general atmosphere of ersatz-medievality, we have Hildegard presented on disc here in much the manner we might expect from a movie director keen to take us back to a long-forgotten age, where chivalrous knights serenaded unattainable maidens in high castle windows (preferably with flowing golden tresses).  It has that slightly false feeling of creating its own legend, rather than cutting through legend to the hard facts underneath.  We even have the long-drawn out final fade as an anonymous setting of Psalm 8 evokes a procession of medieval nuns moving out of the chapel and into the twilight zone beyond.


However, there is no denying that this is a highly effective and, yes, beautiful recording, which, in default of a genuinely authentic approach, gives our 21st century ears just what they like.  In her booklet notes, Kabátková, who also directs the ensemble and is one of the two harpists (the other is also a singer in the group, Hana Blažíková, while the zither player is Margit Ubellacker) writes how the recordings were made over several days in the Cistercian Monastery at Osek where the musicians were able to ponder “the events of recent days – the sweeping celebrations of the 70th anniversary of the end of World War II, or the cruel bloodshed in Ukraine and Syria” while recalling that the monastery had been transformed during the 1950s by the Communist regime into a “prison facility for nuns from several congregations throughout the whole of Czechoslovakia”.  Little wonder that this recording positively oozes atmosphere, reflection and an aura of deep devotion and spiritual commitment.


Do not look to this recording to give historical substances to one of music’s first great composers.  Instead relish the way this ancient music speaks to our own age when treated with such love and devotion by these committed and sincere performers.
Posted by Marc Rochester at 3:37 PM