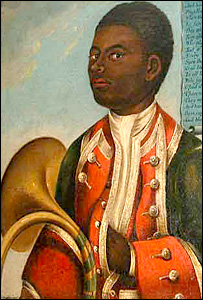 Among the discs reviewed recently (this particular review appears on the MusicWeb International website, from which the disc can be purchased) was one entitled Edinburgh 1742, and comprising music written by Handel and Barsanti.  I liked the playing, the recording and the music - as, perhaps, you can gather from my reprinted review below.  But what intrigued me most about this was something I read in Michael Talbot's outstanding booklet notes.

The French Horn took on a particular resonance in English "high" society during the 18th century.  (Don't give me that gaff about Edinburgh being in Scotland, not England - I know that: I live there for part of the year.  In the 18th century, the concept of Britain was largely non-existent.  The English crown and government had subsumed Scotland and, to all intents and purposes among those in the "higher" levels of society, Edinburgh was just another fine English city.  It would have been anathema for the ladies and gentlemen of Edinburgh society to consider themselves Scots - until Sir Walter Scott came along with his romantic notions of a distinct Scottish character, the term Scots was more-or-less synonymous with lower-class and common.)

Back to the French Horn.  It would seem that any wealthy family worth its salt employed a couple of horn players to act as urban doorbells, announcing arrivals and departures, and as early car horns, travelling with the family coach to clear the way and warn of progress.  The implication given off was that the family spent much of its time in its country estate on the hunting field - the horn's natural habitat - so when back in town, the necessary horn players for the hunt, were given other duties.  That's interesting enough, but what Talbot goes on to point out is that often these horn players were black.

With the slave trade at its peak - Bristol was the hub of that particular activity - those who made their money from trading human beings, would often cherry-pick from their cargoes to find suitably imposing domestic servants not just for themselves, but for their friends and associates.  To have a couple of black men on display outside your front door playing the French Horn, was clearly a tremendous symbol of power and prestige; and the fact is that these former slaves from west Africa via the cotton and sugar plantations of the southern states of the USA seemed to have a peculiar penchant for powerful horn playing.

This, at least, is the impression I get from reading Talbot's essay, nourished, of course, by my own fervid imagination.   But how true a picture is it of 18th century English life?

It might seem purely speculative were it not for this news item which BBC Wales presented on 24th March 2007 (from which the picture at the head of this post is taken).

"Among the attractions tourists will be able to see again at Erddig Hall, near Wrexham, is a well-known 18th Century image of the slave trade.  The National Trust property is home to the Negro Coachboy, a portrait of a black youth thought to be owned by the mansion's founder, John Mellor.
The bicentenary of the Abolition of Slavery Act is on Sunday.  The painting, also known as the 'Negro Minstrel', 'Black Boy' or 'Mellor's Coachboy' hangs in the servants' hall.  Painted around 1720, it is still not clear whether the youngster was a slave taken to live and work at Erddig Hall by Mellor, who was a wealthy London lawyer, or whether he was just a figment of an artist's imagination. A verse written at the house decades later offers a clue to the painting's origins, claiming the boy worked at the hall and was given a Christian burial locally, but it cannot be confirmed. Jeremy Cragg, house and collections manager, said Mellor was not involved in the slave trade, but like many wealthy people of his time might have had a slave boy as a 'fashion accessory'."

It seems that here is a piece of English music history which managed to get itself swept under the carpet by the Political Correctness Brigade, terrified of offending black people by suggesting that, once upon a time, long ago, some of them may have been forced into slavery or treated as curiosities by white people.  It certainly is worth further investigation.  In the meantime, here's my review of the Linn disc, "Edinburgh 1742".

There is some relevance in the title (Edinburgh 1742) , but the really unifying feature in this programme is the pair of French Horns which appear in all but one of the works recorded here.  But before going any further, I must register my unreserved admiration for the excellent booklet notes by Michael Talbot who, in recent years, has turned his perceptive scholarly gaze, previously concentrated on Vivaldi, to focus more intently on Francesco Barsanti.  He offers here some of the most informative, readable and absorbing notes I have ever come across with a CD.  Beyond the enticing outline sketch of Barsanti’s life – born in Lucca, abandoned law for music, established a solid reputation as an oboist (“permanently in the background, never seeking the limelight”), travelled to London in 1723 and in 1735 joined the Edinburgh Musical Society where he “settled into the role of factotum, even acquiring a set of timpani to play in the Society’s orchestra” – Talbot gives us a wonderful insight into the role of the French Horn in 18th century Britain.


We read that the instrument graduated “from the forest to the house, the street and the waterway” and developed “a deep social resonance” in 18th century English society.  Any nobleman or rich merchant would have a pair of servants employed to play French Horns  to announce domestic arrivals and departures.  Intriguingly, Talbot tells us that many of these servants were black, having themselves graduated from house-slaves in America, and gained a high reputation for their prowess as horn players.  The very portability of the French Horn made it a particular feature of water parties.


Of course, the obvious indicator of this in in Handel’s Water Music, and, given Talbot’s intriguing insight into the unique place the French Horn had in English high society, perhaps we might have thought that the inclusion of at least part of that work on this disc would be obvious.   The tracklist makes no mention of it, but it is here, albeit in disguise!  The Concerto in F HWV331 is Handel’s own reworking of two movements from the second of the Water Music Suites, excising the trumpets from the original and transposing the whole thing into the horn-friendly key of F major.  Alec Frank-Gemmill and Joseph Walters bubble along cheerfully in these boisterous movements finding an enticing balance between the rawness of the natural horn and the elegance of a well-turned concert tone, each phrase intelligently moulded and the whole thing given a marvellous buoyancy by some suitably exotic ornamental flourishes.


The other Handel items also employ a pair of French Horns, but in very different capacities.  The March in Ptolemy was written for a Hanoverian military band and became hugely popular amongst the London public in the early days of the Hanoverian monarchy.  The aria from Alcina adds a pair of horns to the mix, but here they are something of a novelty adding a wonderfully vivid edge to this tremendously invigorating depiction of an angry tigress in its lair deciding whether or not to run from the hunters.  Emilie Renard delivers a stupendously powerful vocal line, shaking with suppressed anger and energy.   You can almost feel her claws!


But where, you must be asking, does Edinburgh and, in particular, the year 1742 fit into the picture?  Barsanti, as we read, was based in Edinburgh between 1735 and 1743, marrying a Scots girl and visiting many parts of the country.  The 1742 connection comes from the fact that the five Concerti Grossi on this recording (each employing a pair of French Horns) as well as A Collection of Old Scots Tunes were published in Edinburgh in 1742  (according to Grove – Talbot suggests they appeared a year later).


Since the bulk of the programme is devoted to Barsanti’s Concerti Grossi for two horns, timpani and strings (Op.3 contains five more for trumpet, oboe and timpani, not recorded here), it might be appropriate to discuss these in some detail.   While Handel never visited Edinburgh (so far as we know) his and Barsanti’s paths crossed in London after Barsanti’s return to the English capital in 1743, and there is something distinctly Handelian about Concerto No.1, although the unmistakable stamp of Vivaldi is discernible in much of the violin writing.  For the first two movements the horns very much play a secondary role to the string ensemble, with the timpani rumbling away in the background.  But they then take the lead for a vivacious Allegro and have a somewhat concertante role in the concluding Menuet.  The Vivaldi influence is even more pronounced with the opening of Concerto No.2, where the horns and timpani again assume a somewhat concertante role.  Concerto No.3 opens with a Sostenuto movement in which that famous rhythmic device, the Scotch Snap, seems to figure (and is much vaunted under Peter Whelan’s direction), while the horns crown the music with their stately presence.  The second movement has more than a hint of the hunting field about it as the string ensemble gallops along hotly pursued by the horns and timpani.  Concerto no.4 is the only one with three movements, and in its opening movement the horns sound out in a blaze of glory above busily fugal strings. The adagio from Concerto No.5 is mostly in the form of a swaying Siciliano for the two horns with a basic string accompaniment, while the same Concerto’s Menuet opens with a powerful timpani solo played with startling presence by Alan Emslie.


In all five Concerti Grossi the Edinburgh-based Ensemble Marsyas play with impeccable stylistic elegance.  The dance movements – all of the concertos end with a Menuet – have a pleasing rhythmic lilt, and the clarity of articulation is particularly impressive in the contrapuntal passages.  Occasionally I wonder whether the continuo is pushed a little too far into the background, and the ornamentation often has a slightly false feel to it, but Peter Whelan directs clean-cut, intricately detailed and disciplined performances which largely avoid pretentious display or extravagant exhibitionism.


The four short Old Scots Tunes from Barsanti’s collection of 30, are performed by Colin Scobie who produces a lovely quasi-Scots fiddle sound with some wholly idiomatic gestures and nimbly executed slides in the well-known strathspey The birks of Invermay.  Accompanied by the deft cello of Gulrum Choi and the tinkling harpsichord of Philippe Grisvard, the overall effect is slightly schizophrenic – is this Italianate baroque or Scots traditional? – but decidedly pleasing; as is this entire disc.