Peace and Harmony - What is it? 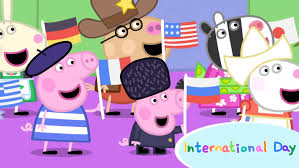 There is an episode of Peppa Pig in which the children at Peppa’s school dress up in the costumes and flags of the countries of the world and sing, to the tune of Kumba-ya, the words “Peace and Harmony to all the World”.


(My intimate knowledge of Peppa Pig, of which I am an absolute devotee, stems from my daughter’s early childhood when she would watch it continuously.  She has moved on to pastures less wholesome now, but I remain an avid viewer, although I admit to finding Ben and Holly more intellectually stimulating.)


In that episode, the teacher of Peppa’s class, Mrs Gazelle, leaves the classroom for a moment.  During her absence, petty jealousies erupt and she returns to the find the class in uproar.  “Children, Children!”, she calls out, clapping her hands to restore order.  “You are supposed to be acting like the countries of the world.  Do you see them arguing and fighting with each other?” (Sad to report, that delicious irony was not lost on my five-year-old daughter.)


In a bid to restore calm, Mrs Gazelle gets the children to hold hands and sing “Peace and Harmony to all the World”.  Of course, there is nothing remotely peaceful in the way they sing, bellowing it out for all their worth.  Neither is there anything harmonious about it – delivered in that sour unison which, when delivered by children makes us say “Ah! Cute!”, but when adults do it we accuse them of being tone deaf.  Irony is heavy in Peppa Pig and I have no doubt the script-writers knew exactly what they were doing here.  But with the words "Peace" and "Harmony" increasingly bandied about in the public arena, it might be worth asking just what do we all mean by them.


“Peace” has become almost an oxymoron in its usage today.  Those who campaign for peace do so extremely noisily, peace protests often erupt into noisy violence, and “peaceful demonstrators” reinforce their points by means of megaphones and microphones.  From all the first-hand recollections of warfare I’ve ever come across, peace – as in quietness or silence – is usually seen as more terrifying than the actual noise of battle.  My mother used to recount how, in London during the Second World War, the thing they dreaded most about the V2 bombs sent over by the Germans was not the noise they made but the peace which followed; “You knew you were safe when you could hear them”, she told us children, “But when it all went silent you were terrified – you knew it was about to drop down to earth and explode, but you had no idea where”.  On top of that, peace is something we musicians generally try not to deal in, so let’s leave that to one side; it is, after all, an unattainable state, whether we like it or not.


“Harmony”, however, is perceived to be a musical term and, as such, discussion of its changing meaning falls easily into the remit of this blog.  The word “harmony” has gone the way of crescendo in being so totally misused that its true meaning is lost.  Of course, words are always changing their meaning; that’s the inevitability of a living language.  When someone tells you about their ass, you assume they are referring to a fleshy part of their anatomy, not to one of their equine possessions.  When someone tells you they are gay, you immediately assume they have a sexual preference for members of their own sex with all the emotional complexes that seem to come with that, not that they are carefree, happy and devoid of psychological hang-ups.  So I have no fundamental objection to most people assuming that a crescendo is always loud or that harmony is always soothing. But those of us who deal with history, and in particular musical history, need to know precisely what words meant to the people using them in the past so that we can properly understand their usage then; not simply project our understanding of terminology on to previous eras where their perceptions were substantially different from ours.  Musical terms have undergone many subtle and not-so-subtle changes of nuance and meaning over the centuries, and it is the job of music historians to keep track of these and, where necessary, re-interpret them for the benefit of modern-day musicians.


The true, musical meaning of “harmony” is straightforward enough.  It means a number of different pitches existing as a block, sounding together or written as a single vertical entity.  (Grove tells gives us rather more detail; “The combining of notes simultaneously to produce chords and the placing of chords in succession, whether or not to produce tonally functional progressions; the word is used also of the system of structural principles governing chords and progressions”.)  We have, in the past, qualified harmony by describing it as consonance or dissonance – although those words have also altered considerably in meaning over the centuries and most would be very ill-advised to use them freely today.  Perhaps the word harmony owes its origins to the very beginnings of music, when ancient Greek and Chinese philosophers, astronomers and mathematicians (amazingly enough, almost exactly at the same time) identified it as a continual parallel movement.

Consequently, it would be perfectly correct to suggest that a number of terrorist cells in Spain, working in parallel to reap death and destruction are, in fact, working in "harmony".  Is that really what we want to imply when we call for "Harmony" in the world?


In the last half century, harmony has become, for musicians, a word more indicative of earlier times (ie the music of the 18th and 19th centuries) than relevant to the music of our day, and to describe the harmonic language of a living composer often seems to imply they lack originality and, damningly, have an antiquated approach to composition.  I have no problem with that, and actually find that to use the word harmony with so much recent music is almost to apply a negative qualitative judgement on it.  Increasingly, we reserve the use of the word to music which fulfils certain rules laid down in the late 19th century by academics with minimal practical experience of their own in the act of composition; something indicated in the second part of the Grove definition.

So by calling for Peace and Harmony, might we not be calling for the terror of silent weaponry unleashed on us in a coordinated attack which adopts the rules of the past and ignores the ethics of contemporary society?  This, surely, was not in the minds of Mrs Gazelle nor the children in Peppa Pig’s class.  Nor is it in the minds of those who call for “Peace and Harmony” in our world today.  But we should be careful what we call for.  Do we really want “Harmony” in either its original meaning – an inevitable and unstoppable parallel movement of celestial bodies – or its current meaning – an antiquated and irrelevant observation of sterile rules laid down two centuries ago?  For me, I would like a world with no war, strife, argument or mass destruction; but that is such an impossible dream I may as well call for “Peace and Harmony” – that, too, is at root, a totally unrealistic demand.
Posted by Marc Rochester at 3:57 PM