The Choral Scene in Singapore

From the outside, it all looks very healthy indeed.  Singapore is positively bristling with choirs.  Schools have them, community centres have them, churches have them and ad hoc groups pop up all over the place.  There is also a very active group of choral directors who have large-scale conferences and gatherings to discuss the finer points of their activity.

But from the inside it is all pretty dreadful.

Read any biography of any Singapore choir and you come across multitudinous references to "Choral Olympics", "Competitions" , "Eisteddfodau" and hardly a mention of repertory.  They dance, they stand around in cleverly contrived patterns, they go to town on the dressing and the colouring, and they commit to memory the most bland, featureless, meaningless drivel and present it as some kind of live musical wallpaper. In short, Singapore choirs compete but they do not sing.

In Singapore, promoted largely by the schools and that phalanx of choral directors, choral singing is a competitive sport, not a musical activity.  Like soccer, only without the physical exercise, the corruption, the loose women or the bags of money, good choral singing is defined by league placings and international triumph is lauded above internal satisfaction.  And, as a result, the connection between music, artistry and choral singing is lost.  There is hardly a choir in Singapore who could successfully cope with a hundredth part of the repertory any self-respecting British, French or German choir - or Australian or New Zealand, for that matter - and because of this, despite my absolute passion for choral singing, I avoid the activity in Singapore like I avoid swimming in crocodile-infested waters.

There are exceptions.  Sit in Mass at the Cathedral of The Good Shepherd any Sunday and Peter Low's choir will entrance with their singing of plainchant, even if some of the other music they sing is so vulgar that I cringe with embarrassment.  Today, at St Andrew's Cathedral, a choir of students gave a lovely unaccompanied performance of the Schulz St John Passion marred only by an amplification system which rendered much of it virtually indecipherable.  And if you wander in to the Esplanade on the evenings of the 21st and 22nd and the afternoon of the 23rd April, you will hear three ladies calling themselves  La Voix Médiévale performing music from the 10th to the 14th centuries - and I instinctively know this will be good.

And very best of all is The Philharmonic Chamber Choir.  I heard them do a programme of unaccompanied Asian works last Sunday and I have to say it was about the best piece of choral singing by a local choir I have ever heard in Singapore.  Here's my review from yesterday's Straits Times. 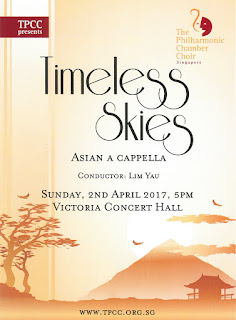 Never let it be said that the Singapore audience for classical music shies away from a challenge.  Here was over 60 minutes of unaccompanied choral singing in which almost every work was written in the 21st century and few of the composers were widely known, yet an impressively large audience sat enthralled through it all.

Even an interval which lasted longer than the entire first half of the concert was not enough to dampen their ardour and, unusually, the audience was as large for the second half as it had been for the first.

The one composer whose name should have been familiar to the audience was Singapore’s own Zechariah Goh.  His Three Refrains at Yang Guan was receiving its world premiere at this concert.  Its roots in a piece for Guqin were clear, but Goh skilfully weaved an intriguing choral work around it.  Perhaps because he had written it especially for The Philharmonic Chamber Choir and was not just present at the concert but actively participating as a member of the choir, it received here a particularly persuasive performance.


The other composer present was Chen Shu-xi.  He was sitting in the balcony rather than singing in the choir, but his four Musical Impressions of Taiwan was given an equally committed and perceptive performance.

These were musically intriguing pieces, but the big challenge for the choir was that the texts were in the Amis language.  In fact, the programme involved texts in six different Asian languages and dialects, of which only Mandarin would have been generally familiar to the 26 singers on stage. The challenges in the music were, fortunately, not so much of the tongue-twisting variety, but were pretty daunting none-the-less.


Indian composer Vanraj Bhatia probably stretched the choir the furthest in this respect and, in the rapid-fire passagework of his Monsoon, they very nearly came unstuck.  The pitch slides which featured so much in his Autumn were far more within the choir’s technical comfort zone.


Six settings of verses from the Rubaiyat of Omar Khayyam in Japanese by Takatomi Nobunaga wandered dangerously close to the atmospheric mood music and contrived athletic obstacles which those groups for whom choral singing is simply a static competitive sport enjoy so much.  But Lim Yau was never going to let his singers degenerate into competitive exhibitionism.


It was the very musicality of all these performances, coupled with a sumptuous choral tone and a control over the various technical footballs which would have been the envy of any Premier League Striker, which vividly demonstrated that under Lim Yau, The Philharmonic Chamber Choir is not just the finest chamber choir in Singapore but can easily hold its own with any in the world. 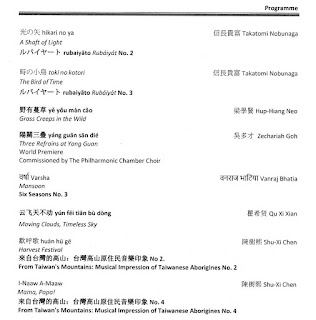 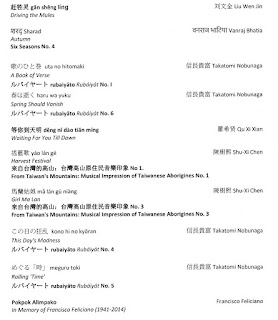 Posted by Marc Rochester at 5:32 PM