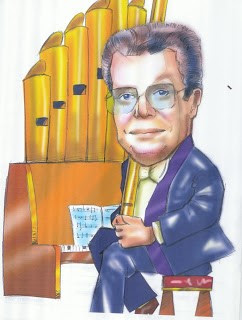 Sitting in on an open rehearsal conducted by Charles Dutoit I was next to my friend and Straits Times reviewing colleague, Chang Tou Liang.  For two uninterrupted hours we watched the tireless maestro barely break into a sweat over Stravinsky’s Firebird – not bad for an octogenarian; Dutoit was 80 last October.  The student orchestra certainly was starting to show signs of exhaustion, and a lot of others in the auditorium found it all too much and beat hasty (and not always silent) retreats.  Tou Liang and I stayed through to the end.  For my part, I was keen to see if maestro would offer any insight into a work he has worked with longer than I have lived.  I was disappointed in this, although it was fascinating to see him work so hard at matters of rhythm and subdivision of beats, often slowing the music down to a point which revealed as much about the genius of Stravinsky’s writing as it did about the shaky technical foundations of some of the orchestral players.  Why Tou Liang sat it out was clear when the maestro finally walked off stage; as he went Tou Liang leapt up from his seat and, dragging with him a remarkably heavy carrier bag, made for the back-stage area.  A colleague, watching him hurry away, commented that “There goes Tou Liang with all his Dutoit CDs hoping to get them all autographed”.


I won’t say I do not understand the fascination with autograph collecting; it’s just that I don’t indulge in it myself.  I did once, in my extreme youth (when Dutoit was a mere stripling in his 30s), and as I think back to that time, an image of a red autograph book springs to mind.  Its pages edged in gold and the padded red cover embossed with the word “autographs” in cursive script.  Several of its pages had been filled; I recall autographs from Eric Williams who had written a book called The Wooden Horse about his escape from a Prisoner-of-War camp during the Second World War, from Vivian Fuchs who had trekked overland to the South Pole, from the great naturalist and son of another Antarctic explorer, Sir Peter Scott, and a singer called Cliff Richard as well as members of his then backing-band, The Shadows.  There was also an elaborate autograph from a French painter called Paul Paris; it was only many years later that I learnt that this artistically-attired, incomprehensibly accented and goatee-bearded man was, in fact, my own father in disguise.  Perhaps that revelation stopped my autograph hunting career (don’t blame yourself, Dad, I had abandoned autographs long before you confessed to your subterfuge), but certainly it had died a death and the autograph book was consigned to some south London landfill long before I took up an interest in music, so the only autographs of great musicians I have ever possessed come from letters, exam reports and, in the case of Malcolm Arnold, on the bottom of a cheque which I cashed as soon as I received it.


But for Tou Liang it is something of an obsession, and when I saw him at the bus stop after the rehearsal and enquired whether he had been successful in foraging for Dutoit autographs, he told me that he had.  “Dutoit is very good about that sort of thing and is happy to sign”, and he went on to tell me that usually when catching artists after shows and presenting swathes of their CDs for signing, he struck lucky.  In fact the only one who has refused to sign for him is Martha Argerich. (If you read this blog, Martha, as I’m sure you do on a regular basis, please be kind enough to send Tou Liang your autograph; it’ll make a lovely man very happy!) He also tells the story of how Peter Donohoe refused to sign until shamed into doing so by something that Tou Liang had written; and since then has showered Tou Liang with autographs.


As the bus came and Tou Liang prepared to clamber aboard, I reminded him that he had never ever asked me to sign my own CDs, at which he stood back in shock: “I didn’t realise you had made any”, was his parting shot as the no. 96 set off towards Clementi. (For non-Singaporeans, I kid you not; there is a suburb of Singapore called Clementi and named after a former British colonial officer who was a distant relative of the composer.)


As I remained alone at the bus stop (the 151 to Hougang seems to attract far fewer customers than the 96 to Clementi) I pondered on the fickleness of fame.  I have had my 15 minutes, according to Andy Warhol, and it has faded out of memory with a rapidity matched only by the powerful Mercedes motor driving the Citaro bus on route 96.  There was a time when people recognised me in the street (well a few did, at least) and even came over to ask whether or not I was the man who played the organ.  Not now.  A performing career which lasted the best part of 40 years seems to have been completely expunged from the collective memory and I am left, a solitary figure at a bus stop, with my memories and a bunch of students who think all I am is some boring old fart who shows an unhealthy interest in the past and in the sex lives of long-dead composers.


There is a more tangible memory to hold on to, even as the passing of years sees my own recollections of a performing past fade away.  In my time I made some dozen LP recordings, as accompanist, conductor or soloist, and while my own copies lie somewhere at the bottom of the Atlantic ocean or in some dockside scrapyard (I assume) in a rusting shipping container, at least one of my LPs was transferred to CD and can still be rooted out from the various online stores which seem to have access to unlimited sources of old and forgotten material.


Released as an LP in 1983 on the Priory label, it came out at the wrong time; the CD format emerged on the commercial market that same year and this sounded the death-knell for LPs.  Added to this was the fact that the organ, when we recorded it one frantic Sunday in February, wasn’t working properly.  At one point I had the organ builder Peter Collins sitting behind the console pushing up keys which stuck down as soon I pressed them, while the St David’s Hall janitors were on a strict overtime regime and towards the end of the session kept coming into the hall and tapping their watches in a pointed manner.  The prospects for this recording were decidedly inauspicious. 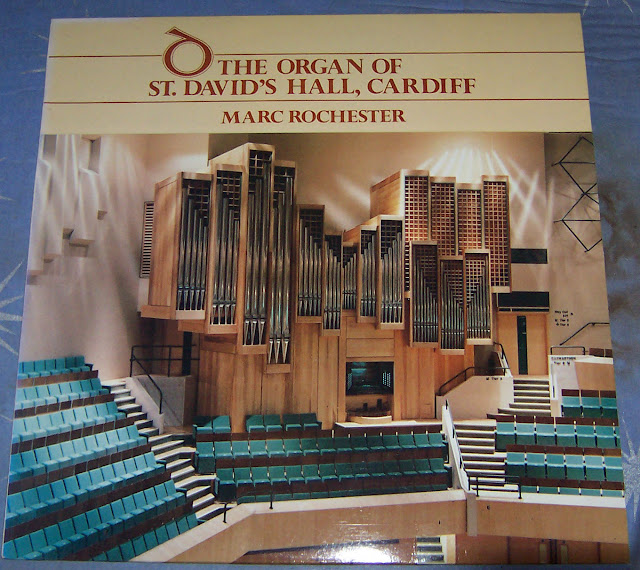 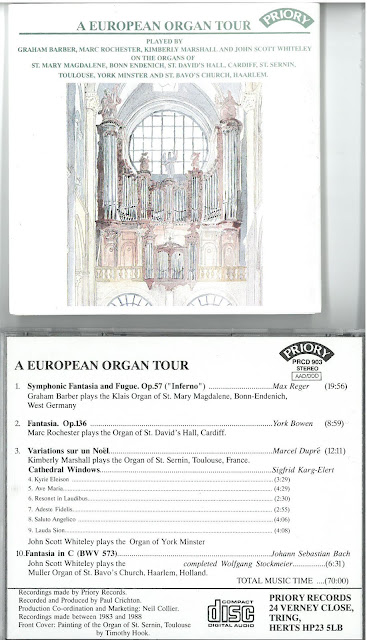 Yet, perhaps because of its magnificent cover photograph (see above), the recording proved to be something of a survivor.  In 1989 Priory reissued my performance of York Bowen’s Fantasia from that LP on their compilation CD “A European Organ Tour (PRCD903), and it stayed in the catalogues a long time; largely, it has to be said, because it came at the time of a revival of interest into York Bowen’s music.  And then, in 2004, they embarked on a series called “Priory LP Archive Series” which delved into their huge and valuable back-catalogues and reissued some of the more enticing tracks in a CD format.  The second volume of this series featured my recordings of Christopher Steel’s Suite Changing Moods and William Mathias’s Variations on a Hymn Tune (a performance of which I am inordinately proud, not least because the composer himself told me how much he liked it), and it seems this CD is still available.  There’s even a copy in the Yong Siew Toh Conservatory library, but with my name missing from the online catalogue which means that my glorious past as a star organist is almost totally obliterated from the view of modern-day students.


When people do recall that I was once a performer, they often ask me why I stopped.  Well the true answer is that a vicious-tongued SSO trombonist so offended me during rehearsals for the Saint-Saëns Symphony back in 2009 that I swore then that I had had enough of trying to convince people that the organ was a legitimate musical instrument and that organists were every bit as good musicians as were trombonists.  It seemed better then to live off memories than live with continual disappointments, and so it has proved to be. 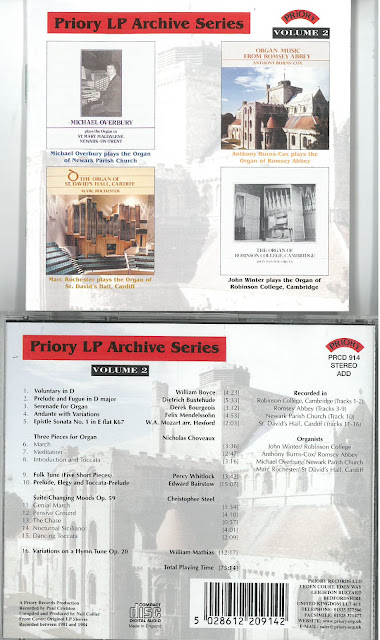 However, it would be nice if someone, just once, turned up CD in hand and asked for my autograph; it would be fun to turn them away à la Argerich, but even nicer to show generosity au Dutoit.


(Your chance to get my autograph and, maybe, even hear me perform one last time, comes on Tuesday 21st March when, celebrating J S Bach's 332nd birthday and attempting to lay the ghosts of the past, I once again venture into the thorny territory of "The Organ - Is It A Legitimate Musical Instrument?" one of the Forum Lectures at 5.30pm in the Stephen Baxter Recital Room at the Yong Siew Toh Conservatory of Music.)
Posted by Marc Rochester at 3:38 PM