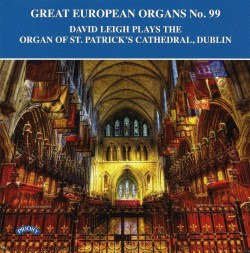 Much of the music on this disc – and several of the composers – will be unfamiliar even to the most avid organ enthusiast.  Yet the fact that the music here is far outside the mainstream of present-day recital repertory should not in any way imply that it is not worth hearing.  Indeed, much of it offers immensely satisfying rewards to the listener, and these are greatly enhanced by the outstanding playing of David Leigh.


The programme is clearly intended to take us through the multifarious delights of this relatively little-appreciated organ.  A six-page essay on the instrument (including almost three pages of specification, listing some 75 speaking stops) charts its colourful history from a 1697 Renatus Harris through a host of British and Irish builders, the most recent work having been done by Harrison & Harrison in 1995, but the bulk of it originating from the instrument newly constructed by Willis in 1902.  We do not get to hear every stop - the booklet tells us that the Great Open Diapason No. 1 is “one of the few ranks not heard on this recording” – but what we do hear sounds absolutely magnificent in this exemplary recording by Priory’s tireless Neil Collier.


Sir Robert Prescott Stewart’s Concert Fantasia certainly earns its keep on the disc by sending us through the ranks of the instrument in a kaleidoscopic array of colour and effect.  Perhaps the piece would not stand up so well on a lesser instrument, but beyond its exploration of the resources of a large organ, it is the only piece on the disc to have a direct Dublin connection: as his obituary in the Musical Times noted, “Robert Stewart’s heart was ever in his native country, and the organ lofts of Trinity College Chapel and of the Cathedrals of Christ Church and St Patrick’s were his triple thrones”.


There is also a connection – albeit an extremely tenuous one - through the Celtic background of Guy Ropartz.  His Prélude Funèbre might seem too reminiscent of his teacher César Franck to make much of an impact, but the rhythmic intrigues of his Sortie, a festive piece which has far more to say for itself than most similarly-named French pieces of the late-19th century, point to his Breton roots.  Jean Giroud, on the other hand, spent most of his working life in Grenoble and appears to have had no Irish, Gaelic or Celtic connections.  If his slow and dreamy Toccata pour L’élevation reminds anyone except the booklet-note writer of the harmonic idiom of Messiaen, I would be hugely surprised.  It does, however, offer a rich harvest of the organ’s more warm and gentle flues.


Every commentary and article on Harvey Grace refers to his outstanding gifts as a writer, as a choir trainer, as an organist, an examiner and an adjudicator.  Finding any mention of him as a composer is like looking for a needle in a haystack, yet he did produce a handful of pieces, many based on hymn tunes, and here is a stirring and eloquent fantasy on the tune Resurgam dating from 1922.  Clearly no technical easy ride, David Leigh handles its journey from darkness to light with great aplomb, not least a glorious manual glissando in the final bars.  But it is in the major work on the disc, the first of Edwin Lemare’s two solo organ symphonies, that Leigh shows his true mettle.  This is a monumental work – some 37 minutes in length and conceived in full symphonic terms – requiring an equally monumental technique.  All is clearly well within the gift of David Leigh who produces a broad sweeping account in which virtuosity, musical insight, deft handling of the organ’s resources and a hint of showmanship combine to create a performance which alone is well worth the price of this very generously-filled disc. 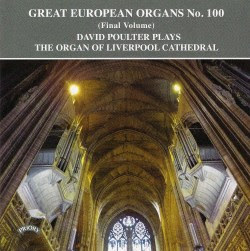 Preparing this review a matter of days before the UK votes in a referendum to decide whether to remain a member of the European Union or to stage what is popularly labelled as “Brexit”, I have no idea what the outcome will be.  Psephologists claim the indications are that it will be a very close run thing indeed, and with their track record of wildly inaccurate predictions, it would be foolhardy in the extreme even to guess at a result at this stage.


Priory Records, however, have no qualms and are going for an unequivocal “Prexit”, announcing their departure from Europe with a fanfare celebrating the biggest and best in Britishness; whatever the rest of the UK might say, Priory are certain that the country’s organ lovers can survive perfectly well on their own.  And with this, the 100th release in the series, they are pulling the plug on their long-running “Great European Organs” series.  They are certainly doing it in some style, with a fabulous organ, glorious music, a wonderfully gifted player and a sumptuous recording.


The first volume - Stephen Cleobury at King’s College Chapel, Cambridge playing a programme of  mostly German music – was, I notice with some interest, recorded 30 years to the day before the referendum (make of that what you will), and was quickly followed – Europhiles please note – by a recording from Brussels which cast its musical net rather wider with a programme which ranged from Vivaldi to Stravinsky by way of Schumann and Dupré.  In the intervening years a huge variety of organs has been featured, often prompting a feeling that the series would have been better titled “Interesting European Organs” rather than “Great” ones, and a plethora of organists has thrown up an eclectic mix of repertory ranging from the obvious to the obscure.  But one thing has remained constant; the exceptionally sympathetic and understanding recording and engineering and a focus on the instrument above player or repertory.  Booklets, often with a somewhat homespun quality about them, have provided plenty of information on the organs and have helped make Priory’s “Great European Organs” a must-have collector’s item for organ-buffs.


Concluding the series, we have the biggest cathedral organ in the UK performing some of the most stirring of all English music, and while I would never suggest David Poulter’s take on the Elgar Sonata is the best available (my vote would go to John Butt on Harmonia Mundi for that), his is a performance which displays the glories of the mighty Liverpool Willis to an amazing effect.  Perhaps the desire to display the organ somewhat obscures the musical argument – Poulter’s continual changing of stops and bouncing between manuals gives it a wonderfully orchestral quality, but induces in me a certain feeling of dizziness – but he does so with glorious facility, letting the music flow with consummate poise and self-assurance.


Three famous Walton transcriptions end the programme, and here Poulter can be excused his love of colour and registration effect, not least in Crown Imperial where regal splendour, crowned by sparkling reeds, sends shivers up and down the spine of any true-blooded Englishman.  Those delightfully jazzy rhythms which give such an upbeat feel to the march Walton wrote to usher in the new Elizabethan age are vivaciously pointed in Poulter’s scintillating account of Orb and Sceptre proving that a mighty organ is just as nimble on its feet as the crispiest stand-alone tracker-action neo-Baroque one.


Sandwiched between these two bursts of patriotic fervour and regal splendour comes a selection of English organ works ranging from the vaguely silly – Whitlock’s pastiche on a Pomp and Circumstance march allows us a blast or two from the Liverpudlian Tuba -  to the discretely touching – Bridge’s Adagio in E positively shimmers through the silvery Willis strings.  Poulter also pays homage to one of his great predecessors, Noel Rawsthorne (Organist at Liverpool from 1955 to 1980) who, in his post-Liverpool life, has taken to producing some fine organ pieces including this sumptuous take on the Londonderry Air  (showcasing a gorgeous clarinet stop), as well as to that icon of 20th century British organ music, Herbert Howells, in a most affecting and surprisingly intimate account of Master Tallis’ Testament.  Those who love a good crescendo should listen to this; Poulter builds from a magical pianissimo to an awesome fortissimo with spell-binding intensity.

Posted by Marc Rochester at 3:57 PM