If we see a blind person in the street, most of us will feel pity and either give a wide berth or offer a helping hand.  If we see a deaf person we will either ignore them, unaware of their disability, or assume that they are slightly unbalanced mentally.  This is a cruel but inescapable fact and the clue lies in the very terminology I have just used.  We emphasise in our daily speech the sense of sight above the sense of sound.  We would hear someone in the street every bit as clearly as we would see them; it’s just that we have come to rely more heavily on our sense of sight than on our sense of sound.  We believe what we see: we do not necessarily believe what we hear, and while that dreadful old cliché “The Camera Never Lies” eventually died with the widespread use of digital imagery, it was never true; it’s just that we had to accept the evidence of our eyes otherwise our world collapsed around us.
﻿

There is a hierarchy of senses.  We put sight at the top and smell at the bottom, with hearing, touch and taste somewhere in the middle.  My aunt has lost her sense of smell, and finds it mildly amusing but in no way an inconvenience.  My mother lost her sense of taste shortly before she died, but still complimented the quality of the food she ate because it looked good.  My father has lost the hearing of one ear and, even though he is a musician and still – at the age of 95 – sings in the church choir, he claims it is only a minor irritation. A colleague wrote to tell me that he had caught his hand in an escalator and lost all sense of touch in it – but he still managed to work unaided.  Yet when my old friend Pete van Biene lost his sight after attending a party where the punch was laced with methyl alcohol, he was devastated and never recovered from the shock.
But has it always been like this?  Certainly in musicians loss of hearing has been regarded as a more serious problem than loss of sight.  Everybody knows that Beethoven went deaf, but how many know that Bach went blind?  I doubt whether many of us would even have heard of Smetana had he not gone deaf and, as a result, poured his energies into composing (including the hugely popular Vltava), yet there is no evidence that Delius’s blindness enhanced his compositional output (“It all sounds the same to me”, is one harsh, but not entirely unjustified, reaction to the music of Delius).  Being blind has certainly not prevented the emergence of great performers.  On the organ, alone, one can point to a veritable plethora of dazzlingly virtuoso French organists who were blind - Vierne, Dupré, Langlais, André Marchal – and during the 1960s the Royal College for the Blind positively urged its members to take up a musical career; my youth seems to have been surrounded by blind piano tuners.


Suddenly, it seems, things have changed and music has become a visual rather than an aural art.  Which brings me to the research mentioned in my last blog post.  Chia-Jung Tsay, from University College London, published a paper in the Proceedings of the National Academy of Sciences in the United States of America in which the results of some interesting research were revealed.  Presenting non-musical volunteers with either video-only or sound-only recordings of classical music competitions, the volunteers were asked to identify the winners of each competition. (I paraphrase the details in the interest of brevity, but you can read the whole paper on http://www.pnas.org/content/early/2013/08/16/1221454110.full.pdf+html).  Those who used the video-only recordings were far more likely to get it right than those who used the sound-only ones.  The conclusion to be drawn is that contemporary audiences (and judges) rely more on sight than sound in assessing a musical performance.  As I’ve observed time and time again in this blog, the current generation of music-lovers needs visual images before they can appreciate a musical performance.  Asked to comment on recordings, students assume that one is talking about a DVD or YouTube.  Asked about classical music coverage on the media, and most will complain that there is not enough; assuming that by media, one means television and forgetting the ready availability, thanks to internet ubqiuitousness, of those classical music radio stations outside south east Asia which broadcast 24 hours, seven days a week, intelligent and tasteful programming.  For today’s music lovers, sound-only classical music is second best; and for many not an option at all.  Hearing, for them, is seeing.
Thus the desire of record companies to sign up attractive, young players, often of dubious musical quality, but who are, in the eyes of those for whom superficiality is a three-dimensional word, attractive.  What chance would the wart-faced Liszt, the cadaverous Chopin or the ghoulishly gaunt Paganini have in today’s climate?  None.  Brilliant as your playing may be, if your stomach bulges over your belt, if your hands and face are smothered with liver spots or your eyes focus in contrary directions, there’s no hope for you as a performer.  Back in the 1980s there was a magnificent British tenor called Ian Partridge, with whom I had the great good fortune to work alongside in a memorable performance of the St Matthew Passion.  His was a tremendous voice, but I remember one record producer telling me that his stage career never took off because he has "an unfortunate face". (He also described the composer John Gardner as “looking like a bull dog with a harelip”, so generosity of spirit was not part of his make-up.)  Sadly, that record producer became a leading figure in one of the multi-national labels which first started to market recordings through pictures of the artist rather than through the descriptive landscapes or abstract images which, up to that point, had adorned record covers.

Tsay’s research showed that pianists who looked to be passionate while performing and who wore their emotions on their sleeves were correctly identified by the volunteers as the winners.  Without the benefit of that image, those who listened to sound-only recordings had only musicality and technique to go by – and they largely got it wrong.  So much, then for those great musicians of the past who believed in maintaining a stern, unbending posture and expressed no emotion or sensitivity in their faces.  Rachmaninov, unfairly described by one of music’s ugliest men – Igor Stravinsky – as “a six-and-a-half foot scowl” (it was not true - as pictures of Rachmaninov proved – but he rarely smiled or, indeed, showed any emotion while playing) would stand no hope in today’s climate; the greatest pianist of the 20th century confined to the dustbin of no-chancers by the 21st century appetite for clean and sexy visual images.


I saw the late-night Prom in London where John Eliot Gardiner’s Monteverdi Choir gave a scintillating account of some Bach choral works.  Those around me commented on the “intimacy” they brought to the Albert Hall and to the “authenticity” of the performances.  Authenticity my foot!  There’s no way Bach would have recognised these polished, neat and, above all, visually arresting performances.  He wrote his music with the full knowledge that nobody would see the musicians stuck high in a gallery, and would surely have been horrified to think that the performers would one day become centre stage, eclipsing even the God for whom he originally conceived his marvellous music.
Several correspondents to this blog, when I wrote a piece about listening to live music, confessed that they listened with their eyes shut, because they were distracted by what they saw.  I confess to the doing the same.  Interestingly enough, those correspondents, like me, list a whole range of musical heroes at odds with those who are the popular heroes of today.  In the organ world, a passionate following for Cameron Carpenter is not so passionate amongst those of us who choose to hear rather than see (although I’m the first to admire his phenomenal technique). Ecstatic praise for Sarah Chang seems reserved only for those who like what she looks like on stage.  And I’m inclined to question how many records Kathryn Jenkins might have sold were she not so captivatingly photogenic. 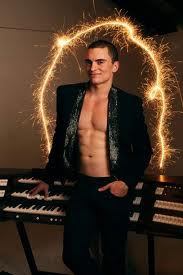 For the great mass of people, music is no longer about sound, but about sight, and while many would suggest that this is merely “packaging”, a necessary route to the hearts and dollars of a 21st century market, I would suggest that you only need study the reaction of children to “packaging”.  Spend a fortune on their Christmas present, wrap it up, and you will find that they spend many more hours playing with the colourful packaging than with the present itself.  Sadly, we have now reached the stage where people prefer the  packaging of Classical Music to its content.  This research has shown that, so long as you can see, you can appreciate what now passes as Classical Music.
Posted by Dr Marc Rochester at 10:07 PM