It has crept up with the inevitability of the incoming tide.  Like the tide, one has hardly noticed its gradual encroachment, and now it’s in full flood, it’s hard to think how things were before. 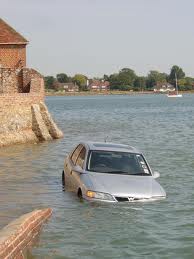 ﻿
﻿﻿
It suddenly dawned on me when, after a day of examining wind candidates, I looked around the room to make sure nothing was left behind and realised there were no less than 15 plastic bottles left in various stages of emptiness by departing candidates.  Every single candidate had come in with a plastic bottle of water, most had gulped down the contents at various pauses during their exams and one, I remembered, had delayed every single scale and exercise by taking a large swig before each attempt.


Then I think back to previous exam sessions.  The times when, assuming a candidate to be taking a somewhat overlong break between movements, I had been busily writing up the report only to be disturbed by a strange gurgling noise from the candidate; looking up I would see a swig being taken from one of those expensive bottles capped with a teat – the sort of thing my five-year-old daughter, weaned from feeding bottles, would now look at askance. (How long, I wonder, before she returns to the feeding bottle, now adorned with an expensive label, as an essential fashion accessory.)  The times when a teacher has bustled in just as the exam starts to give the candidate the bottle forgotten in the panic of entering the exam room.  The times when a panicky house-holder has dug out a large cloth to put on the precious grand piano so that bottles do not leave indelible rings on the polished surface.  The times when, after a quick swig, the candidate has dropped the screw lid and spent the next few minutes frantically crawling around the floor in order to retrieve it.
What is it about water in bottles that means nobody ever goes anywhere without one?  Surely, you would have thought, a child could survive the 10 minutes it takes to get through a grade 1 without frequent recourse to the bottle?  Not a bit of it.  I’ve seen more bottles drained during an exam than I’ve heard correctly played scales.  It is rare, indeed, for a candidate to enter the room without clutching instrument, music, appointment slip and water (forget that, some forget the instrument, some forget the music, some forget the appointment slip).


And it must be a bottle. Cups, glasses, jugs clearly don’t have the same cachet.  My examining yesterday was in a room where a large jug of water had been strategically placed.  It ended the day as full as it had been at the start.  I then noticed that next to my examining desk a huge, sealed bottle of water had been left for my exclusive use.  This was not a plastic one, but one in etched, tinted, designer slick glass.  I studied it.  The contents were special water percolated over centuries through the mountains of Norway (how odd that, when it comes to water, freshness is not an attribute – the staleness of centuries is a positive marketing tool).  I broke the seal and removed the wire stays to extract the rubber-tinged top.  I had a swig and, frankly, couldn’t taste any difference between that and the London tap water the Pepsi Cola Corporation bottle in Catford and sell to the Indians, or the straight-from-the-tap water with which I used to top up my whiskey when I lived in Ireland (don’t tell them I did that to their precious whiskey).


Bottled water has become a fashion statement.  I assume there’s a class thing in it and the label sends out messages about your income, lifestyle and social leanings.  For me whether it says Evian ä or Lidl, whether it has been percolated over centuries through the mountains of Scandinavia or has been drawn fresh from a tap in Tallow is gloriously irrelevant.  Water is water and, while we need it to live, like going to the toilet, it’s one of those things I choose not to make a statement about.


There is a statistic doing the rounds – masquerading as medical advice but presumably encouraged by the bottled water industry – that we need x number of litres of water a day to survive.  I’ve read that water is an essential part of any diet and that, if you want to lose weight and stay fit, the more water you gulp down the better it is.  I’m sure that’s all true, and having once spent a night in hospital due to dehydration and a lifetime bursting out of my shirt buttons, I can hardly say that I have found an alternative to the health benefits of water.  But do we all need to drink so much of it, so frequently, so demonstratively and so obsessively?  A lady who drove me five miles to my hotel the other day, took huge swigs of water every time the traffic lights turned red.


I’m inclined to suggest, however, that it is the act of clutching and sucking at a bottle, rather than the urge to consume its contents, which is the driving force behind this tsunami of water consumption.  I well remember an occasion when the stage manager had placed plastic bottles of water beside the chairs of the four soloists in a performance of some major choral work.  Whenever not singing, the soloists snatched their bottles and gulped down the contents publicly.  It looked horrible, so the next day, when the performance was repeated, I told the stage manager to put the water into glasses.  They remained untouched for the entire duration of the concert.


Some years ago, when the Trinity diplomas added a section for stagecraft, protracted and heated discussions raged amongst examiners concerning the appropriateness or otherwise of bringing plastic bottles on to the stage.  Old timers felt it looked awful, younger ones couldn’t see a problem.  Perhaps in the 1930s a similar discussion might have gone on about cigarettes.  In an era when everybody smoked, many people barely noticed the packet of fags and the lighter on the piano during a lieder recital (I actually remember just such a thing in 1960s London).  Today there would be a mass audience walk out.  Will not the same happen in a few years when the current fad for obsessive consumption of bottled water fades?


Going back to my wind candidates, I have to say that the water had no significant effect on their performance – indeed, most of them were pretty mundane and I saw no evidence that the frequent recourse to the bottle did anything other than steady their nerves.  But there you have it.  The water bottle is not there for health benefits, it’s there as a comfort.  The bottle itself has become an addiction.  If you were to rip it out of the candidate’s hands, they would fall to pieces.  How long before they start coming into the room with water-filled syringes and start injecting themselves intravenously?


Water may seem harmless, but it has become an addiction which, when you notice it, is profoundly disturbing.  Let’s just hope that the craze, like the tide, eventually ebbs and we can have our music unbottled.
Posted by Dr Marc Rochester at 8:06 PM