Of all the drab, dreary, dirty and dusty Middle-Eastern towns I have found myself in over the past months, few are as drab, dreary, dirty or dusty as Sharjah.
I was told that in the past Sharjah was a hotbed of vice, drunkenness and debauchery, but it managed to bankrupt itself and sought help from the government of Saudi Arabia.  They promised to bail it out on condition that Sharjah imposed strict Islamic values on its residents and rid its streets of all unsavoury activities.  Perhaps that explains the lifelessness I see all around me, and with its crumbling buildings, disintegrating roads, its collapsing pavements, grimy shop-windows effectively masking faded displays of age-old products, and its general air of neglect, it seems like life stagnated sometime in the mid-70s since when nothing has changed.


That sense of stepping back into time was dramatically reinforced when, walking across a downtown sandy waste ground littered with randomly parked cars shimmering in the blazing sun (mix the inability of Middle Eastern drivers to think and drive simultaneously, the impossibility of marking white lines on sand and the enchanting Islamic habit of driving to within 100 meters of a mosque and then simply abandoning the car, and you have the utter chaos which is an Arab car park) I stumbled across this – 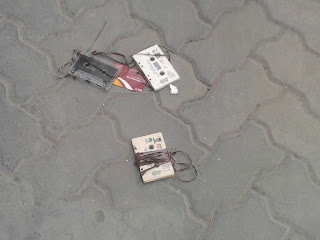 Now for people of a certain generation, there will be nothing remarkable about a discarded cassette with the tape pouring from it like the spilled innards of a First World War bayonet victim.  Time was when you only had to stop by a roadside and find the hedgerows and verges strewn with miles of magnetic tape leading, by way of several impenetrable knots, to an empty cassette case.  Street sweepers in town would get the bristles of their brushes entangled on a daily basis with yards of twisted cassette tape.  There was even a memorable Inspector Morse episode in which a young woman was wrestling in her car with recalcitrant cassette which was spewing reams of tape out on to the floor of the car; we just knew she was going to be the next murder victim and I have often wondered whether the praiseworthy Colin Dexter who wrote these praiseworthier novels was sending out a subliminal message that cassettes were bad for your health (after all, his fictional hero, the eponymous Morse, was renowned for his classic collection of LPs).


The sheer ubiquitousness of the cassette throughout the 1970s and 1980s makes those of us who lived then forget that it is no more.  In the year that Sony eventually stopped making its Walkman and that manufacturing of blank tapes seems to be solely in the hands of two factories in China, its almost total demise has passed almost unnoticed.


It has certainly passed unlamented.  It was, after all, a pretty horrible medium.  Beyond its passion for unravelling itself (leading to such extremes of frustration that normally law-abiding motorists would angrily rip them from the machine and toss them out the car window to despoil the passing countryside) it reproduced sound with an insistent hiss and a lack of charm which is matched today only by the town of Sharjah.  You could never find what you wanted on it, and the quicker the fast-forward mechanism ran, the more likely it was that the tape would get chewed up in the machine.  On top of that, its plastic packaging was even more prone to immediate disintegration than a CD jewel case.  I hated it, as did everyone else I knew.  Yet I had hundreds.  When we moved from KL to Singapore, I decided eventually to discard all but a handful of my cassette collection and was astonished by what I had amassed.  There was a stunning version of The Planets from an Australian orchestra (which one, I forget), an off-radio Gothic Symphony from the Albert Hall, every single broadcast of Choral Evensong transmitted by the BBC from 1970 to 1975 (Including a classic with George Thalben-Ball in imperious charge at the Temple church) and a wonderful dramatisation of the life of Percy Grainger taken off a radio broadcast sometime in the early 1980s.


Cassette aficionados will quickly recognise that the vast majority of those in my collection were actually recordings I had made from radio broadcasts (not really illegal, since they were only ever for my private listening).  I could never take the concept of a pre-recorded cassette seriously; did anyone really accept that hollow, hissing sound in preference to the rich and warm tone of an LP, scratches and all?   And that, for me, was what the cassette was - a convenient method of recording things for my personal pleasure.


For most people, its real popularity lay in its wonderful portability and ability to be listened to (although God only knows why) whilst jogging or involved in some other vaguely ridiculous physical exertion, without the music jumping around or being distorted in some other way.  In that area it could never hope to compete with a pre-loaded iPod.  Certainly, in terms of reproduction quality, it never ever held a match to either LP or CD, no matter how much Chrome, Silver or Gold was added.  So its fate was pretty well sealed once the 21st century dawned.   My last cassette deck ground to a halt a decade ago and it’s almost that long since I last sat in a car – once the cassette’s greatest ally – which had a cassette player attached to its dashboard.  To all intents and purposes it has passed from my knowledge.


Yet, wandering through the bazaars and souks of Dubai I found a plethora of shops selling not just piles of 60, 90 or 120 minute blank cassettes along with cassette head cleaners and other assorted cassette-related paraphernalia, but the hardware as well.  Close to where the dhows come in and off-load their mind-boggling array of smuggled goods from across the Persian Gulf, just about every shop sold cassette players, recorders and walkmen all still in the shrink-wrap that was applied when they left the factory in Iran or wherever it is that so many Sony, Panasonic, LG and Akai badges are attached to locally-made electronics.  I was sorely tempted to buy one; I even got into a half-hearted haggle over prices with a man selling a Sony double cassette deck which, he assured me, was fresh from the factory in Japan.


But then I remembered Sharjah!  Did I really want to take myself back to the drab, dreary, dull and dusty atmosphere of the 1970s?  Nostalgia is one thing, pointless backwardism is another.
Posted by Dr Marc Rochester at 5:41 PM