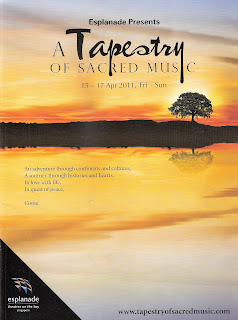 One of the highlights of the Singapore musical calendar is for me the annual Tapestry Festival of Sacred Music put on over a weekend in April by the Esplanade.  It covers just about everything from Tibetan prayer wheels to Gregorian Chants and fills the place with its free foyer events and major concert hall performances.  I love the juxtaposition of faiths witnessed through their music and I find it as personally stimulating as I do artistically enriching. 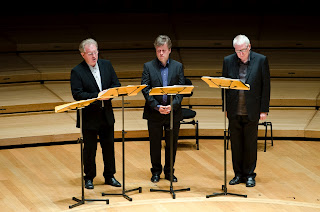 Top of the bill for me this year was the concert by The Hilliard Ensemble who kept a rather paltry audience absorbed for two hours with some superb unaccompanied singing.  The first half, with its glorious mixture of Arvo Part and medieval English items, was a brilliant tour-de force in which the singers never faltered for a moment and seemed mildly embarrassed by the impetuous applause for each individual item earnestly started by a fellow in front of me who wasn't going to risk silence intervening.  Not for him the quiet contemplation of the beauty of sacred music, but I don't begrudge for a moment his clear enthusiasm for the performance, which was from every standpoint, wonderful.  I only baulked at the whoops of joy and testerone-filled ululations at the end which seemed more suited to the soccer stadium than the concert hall. 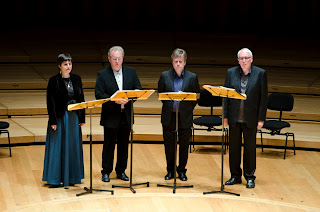 I was disappointed by two things, however.  The first was the absence of Rogers Covey-Crump from the quartet of singers.  He had been replaced by Monika Maulch at the request of the Esplanade organisers who felt that an all-male line-up was too esoteric for a Singapore audience (or so the Hilliard themselves suggested in an interview given to the Straits Times some while back) .  There is no way that a soprano, even one as discreet and precise as Ms Maulch, will ever fit tonally into an ensemble of such refined male voices and, as a result, the programme was adjusted to avoid intertwining polyphonic lines.  (This despite the very poor concert programme notes which suggested that the programme comprised almost entirely polyphonic music.) This gave rise to my second disappointment. 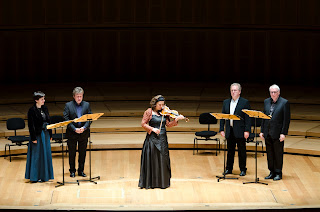 Much as I love the music of Bach, a whole hour of isolated verses from his chorales, mostly in D minor, sung by four voices, proved to be too much of a good thing and while they were irregularly interspersed with some solo violin pieces in an attempt to show how Bach's unaccompanied Partita in D minor was really an expression of his Lutheran faith, it showed nothing more than that lots of Bach in D minor can sound vaguely similar and that chorales, outside the context of a cantata, don't, in themselves, make for really interesting listening.

I tire of academics who enjoy nothing more than to seek out hidden references in Bach's music.  In the 60s it was all about numbers; now it seems all about melodic relationships.  It makes for an intriguing, if mildly silly, read in scholarly papers, but when it impinges into a performance, I think it's gone too far.  The German musicologist who "found" references to chorale melodies in the unaccompanied Partitas and then devised a concert programme which attempted to highlight these, merely undermined the stature of Bach's music.  I don't feel that a public concert to an audience who have gathered to hear great singing from a famous ensemble is really the palce to indulge in such pointless pursuits.


(The pictures, by the way, come from the Esplanade - who hold their copyright - and were intended to go with my Straits Times review.  They are too good not to print here as well!)