Back in Bangkok on other business, I received some unsolicited feedback from the examining tour I had completed there just a fortnight earlier.  It will make me hugely unpopular with my examiner colleagues, but I must confess that I wish we were able to get more direct feedback like this from candidates, teachers and parents.


As examiners we sit in judgement in the examining room, writing our reports and issuing our marks, and we never get questioned (except on administrative issues by our far distant superiors) nor hear and see the reactions to our work.  I can’t help feeling it would do us all a lot of good if we had to answer to our customers rather than, as the process is currently structured, only get to hear negative feedback after it’s been filtered through a lengthy complaints procedure.  If we knew there was every possibility we would have to defend our actions face to face with those directly concerned, I think it would sharpen our minds considerably.


Certainly such meetings can be awkward.  I remember the perfectly splendid Paul Sturman recounting a tricky incident in a remote outpost of India where the previous examiner had caused much offence through stern marking.  The teachers and their assorted supporters were determined to prevent Paul from doing the same.  Desperate to get their hands on his reports while he was still around to be challenged, an angry mob followed him to the airport.  Only as the final call for the flight was made did Paul thrust his sheath of reports into the hands of the representative before leaping up the stairs and on to the place.


Mostly, though, we have nothing to be afraid of and I, for one, have absolute confidence in my results.  In the heat of the moment, and under the pressure of work, I’m sure I don’t always justify my marks as clearly as I should and it would be lovely to explain to the people concerned issues that puzzle them.  But, of course, that’s impossible, not least because, by the time any such meeting is arranged, we will have long forgotten what it was that occasioned the original comment.


Or is it?  The days of a single examiner closeted in a room with a single candidate passing unquestioned judgement surely can’t go on much longer.  Luckily we’re all upright, honest and deeply conscientious people; but society finds it increasingly difficult to appreciate that such people do exist and assume nobody is capable of operating without some kind of hidden, and usually malicious, agenda.


So a chance encounter in Bangkok with the teacher of a grade 6 pianist who had played the Telemann Fantasia in F was a rare pleasure.  I’ve mentioned this piece before in this blog, complaining about the habit candidates have of ending it with a long drawn-out diminuendo.  On this occasion, though, the problem lay in the fact that the piece comprises two separate movements and I had passed comment about the speed of the second one (marked “Vivace”).  In short, I had, apparently, given a lower than expected mark and justified it with the comment that the “Vivace” was much too slow.


I wish exam boards would avoid two-movements as a single piece in the exam. It is not so common in the piano lists as in the woodwind, where it’s endemic, but it makes twice the work for an examiner who, effectively, has to examine two different pieces in place of one.   And before anyone complains that music exams are not run for the convenience of the examiner, I should say that it also causes twice the work for the candidates who need to address the problem of playing two different pieces as if they were one.


The drawbacks of this practice were vividly shown a few years back when the ATCL syllabus included what was, for my money, the most unutterably ghastly repertoire selection any board has ever set in any exam anywhere.  It was by Benjamin Britten and was called Moderato and Nocturne.  It was such grim music that even Britten had thrown it away; it was only in print because some money-grabbing academic had, with an eye to pocketing some royalties, resurrected it and claimed it as a significant addition to the piano repertoire.  Just about every ATCL candidate chose it probably because, technically, it looked easy.  But, as with everything that looks easy, it was not, and virtually every ATCL candidate failed it.  Where they went so disastrously wrong was in failing to recognise that the two movements ran at almost identical speeds.  In a commendable attempt to bring in contrast (where, in truth, there was not much) they turned “Moderato” into “Presto” and “Nocturne” into “Somnabulantissimo” and the whole thing became an incoherent  musical nightmare.


Grade 6 students tend to think differently from ATCL ones and, far from recognising the duality of movements, they regard the two movements as a single continuous piece.  It doesn’t help that the first movement of the Telemann takes up two lines while the second goes on for pages, so it looks as if the first is a simple introduction to the second.  But the two are marked with radically contrasting tempo markings, and I have lost count of the number of times I have drawn attention in a report form to the fact that the first movement (“Largo”) is too fast or the second movement too slow; in short most candidates seem to play both Largo and Vivace as if they were identical in speed. On top of that, candidates often run the two together, one famously turning the last chord of the first movement into the first chord of the second.  The Bangkok teacher was adamant that I must have made a mistake, “We were meticulous in following the Metronome markings”, I was told.  And at that point alarm bells rang. 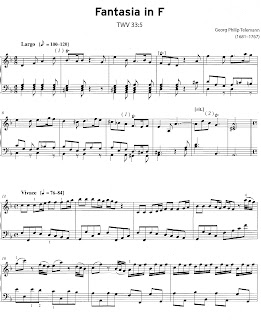 I hate Metronomes.  Years of having to play with one ticking away relentlessly during lessons put me off them for life.  True, they help you keep in time, but in so doing they also stifle just about every other musical aspect of a performance.  For almost 200 years Metronomes worked on a clockwork mechanism.  There were always problems.  If it wasn’t wound up properly, it ran slowly and eventually clicked its way to a stop.  If it was made in Hong Kong (as many in my youth were) you were lucky if the clicks were evenly spaced; more often it limped along unevenly.  And then unless your eyes were very good, they were damnably difficult to set properly.  Vierne (who was blind) famously set his Metronome with the block in the wrong place so that his markings were invariably considerably faster than he intended, while Schumann was notoriously unable to master the thing, despite valiantly adding Metronome markings to his music.


Recently Metronomes have gone, as has everything else in life, Digital.  That may mean more reliability but not necessarily infallibility and, as it still has to be set by a human being, mistakes are made.  Yet some in music education still regard the Metronome as a demi-God whose very addictive clicking or blinking is an unwavering truth.  I remember accompanying a student in an exam and noticing that the examiner frequently checked our speeds against the Metronome he had on his desk.  Do examiners still do this?  I hope not…but I suspect some still do.  And what happens?  Instead of judging the choice of speed with human ears and intellect, one relies on the digital device to decide what’s right and what’s wrong – “It says half note equals 60 yet this speed was nearer 50, so it’s a bad performance”.  Surely we all know what Largo and Vivace are and don’t need a machine to tell us?


On top of that most Metronome markings are added by editors who have their own opinions as to the numerical value of a composer’s tempo marking.  Thus they have no real validity beyond being a loose guide, yet once it’s there in print teachers often regard it as sacrosanct.  And as it’s a policy with all examining boards to include a suggested Metronome mark for all piano pieces, teachers come to rely on Metronomes rather than their own common sense.  From my memory of the Bangkok candidate (which was still quite vivid) I was convinced that she had misread the Metronome marking and instead of setting it to click at 76-84 every quarter note, set it to click every eighth note, which is why the Vivace was considerably slower than the Largo.  It certainly doesn’t help that the musical moron who added the metronome marks to this piece gave a Metronome mark for every eighth note in a 6/8 time-signature, thereby demolishing the essential fact that there are only two beats and not six to a bar in this time signature.  How Telemann, who died long before the Metronome was invented, would have been rolling in his grave.


The over-reliance on digital devices to support a musical performance doesn’t stop with the Metronome.  Increasingly troubled by the fact that when I hear student, amateur and (occasionally) professional orchestras tuning on stage, nobody seems to try and match to oboe’s A, I raised my concern with a conductor friend.  “Ah!”, he exclaimed, “That’s because they are all using their digital tuners and instead of listening, they are looking at the wave pattern.”  He went on to relate how an oboe in his orchestra had adjusted the A for tuning with his lip to bring it into line with the digital tuner, only, when the performance got underway, to revert to his normal lip.  The result – appalling wind intonation.  “I have banned digital tuners from my orchestras”, he told me, “and we no longer have serious tuning issues”.


It’s wonderful to have these digital devices, but over-reliance on them leads to a loss of aural consciousness.  Surely tuning, like speed, is something you hear rather than see, and the best equipment for judging such things are human ears.
Posted by Dr Marc Rochester at 9:26 AM