It is said that everyone who was alive at the time can remember exactly where they were and what they were doing when they heard the news of John F Kennedy’s assassination.  I certainly can.  I was in the front room of our house in south London practising for my grade 3 piano exam in a few days’ time.  It was rather a nice piece of Hindemith, which I hugely enjoyed playing, and I was annoyed when my further came into the room – piano practice times were sacrosanct in our house – and told me to stop because President Kennedy had been shot.  I remember asking my father why it mattered so much to him since he never seemed to like Americans.  “This one was different”, he told me.  I didn’t go to see the television in the other room, as Dad had suggested, but stayed where I was wondering why the death of an American President was more important than practising for my grade 3.  It was many years before I appreciated the horror my father and others must have felt and why this particular death has become so ingrained in our consciousness; for years the world had been teetering on the brink of nuclear annihilation and it was widely felt that with Kennedy’s death the Russian threat was all the more real to all of us.  History may have taught us that this was not the case, but I realise what a catastrophe Kennedy’s assassination must have seemed at the time.
Other deaths have had a more personal resonance, but there is one other death of a non-family member which I remember so vividly that I can give an almost exact account of the moment in time when I heard news of it.
﻿
Maundy Thursday 1975 (for non-Christians that’s the Thursday before Easter – which, come to think of it, still doesn’t really help non-Christians) and the final university vacation before the finals exams for my BMus degree.  With my parents I was going to spend Easter with my sister and her family who lived in an idyllic spot in the borders of Scotland.  We had just reached the notorious Gravelly Hill Interchange – Spaghetti Junction – on the M6 near Birmingham and traffic came to a standstill. It was snowing and as I sat in the back seat of my father’s Volvo, I watched as the snow started to pile up on the motorway.  While we sat there not moving the One o’clock News came on the car radio and the newsreader – I don’t think it was the gravelly rasp of the late, great William Hardcastle who had brought us the memorable news of Stravinsky’s death four years earlier – announced the death of Sir Arthur Bliss, Master of the Queen’s Musick.﻿

﻿
﻿Someone had been contacted to assess Bliss’s life.  I don’t know who it was but as I write this I heard
the voice of Michael Tippett; and I’m sure it couldn’t have been him.  Whoever it was stressed how “nice”, “charming” and what a “consummate gentleman” Bliss had been.  I had met Bliss at a concert performance of his opera The Olympians some time earlier, and the news of his death struck home.  I determined to get to know his music better; apart from The Olympians (not a note of which I remembered then or now) all I knew was the March from Things to Come and the Colour Symphony which we had played in the school orchestra.  Another voice on the radio declared his greatest work to have been Morning Heroes, and when we eventually arrived in Scotland and took a day shopping in Edinburgh, I went straight to the record shop which sat proudly then in Princes Street (it may even have been a branch of the then reputable HMV) and picked up a recently-released LP of it. 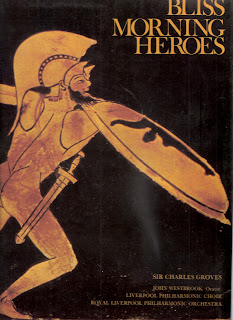 From that day to this, Morning Heroes has been one of my dearest and most treasured favourites.  It has always been my desire to conduct it, but I know I never shall and I never could; there’s moment at the end of the chorus in which the great list of heroes killed on the battlefields of ancient Troy reaches “Brave Hector”, which is so impassioned and so frighteningly dramatic that I know I could never communicate the depth of my feeling for this moment to an orchestra or choir.  It also need s fantastic narrator to recite, against the orchestral backdrop, verses from Wilfred Owen, The Iliad and ancient Chinese writings; the LP had the John Westbrook; a rather insipid CD version released some time ago on the Cala label had the wonderful Brian Blessed, but his declamatory style was too Shakespearean to do full justice to Bliss’s work.  To this day, no other recording ever seems to have been made. 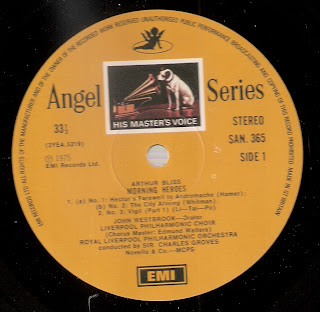 So touched was I by the references to Bliss as “nice” that I determined to dig deep into his output.  I started my MA course analysing his Music for Strings and discovered a range of works including a Piano Concerto and a choral Pastorale but somehow Bliss never did again what he did in Morning Heroes and, nice as he was, he does not go down in history as one of the great British composers of the 20th century. 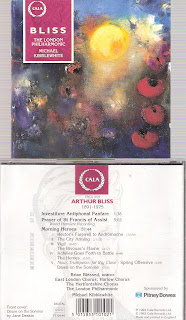 Nice composers rarely do earn a place in history.  Look at the big names we all know; Bach,Handel, Mozart, Beethoven, Brahms, Wagner, Mahler.  Every one of them a thoroughly nasty piece of work, most of whom one would hope never to meet alone in a dark alley at night.  Haydn seems to have been all right – unless, that is, you look at the disgraceful way he treated his wife, behaviour which is excused by most of his biographers by dismissing his wife as a “simple, dull peasant woman” – and while Bruckner wouldn’t hurt a fly, he certainly was not what you would call a man whose company anyone would have actively sought; and as the father of a pre-teen daughter, I would have done anything to keep him away from my family.
I am always vaguely amused by those who desperately seek out composers and great musicians in order to be photographed with them or collect their autographs; they invariably get disappointed when their great heroes turn out to be utterly unpleasant people. 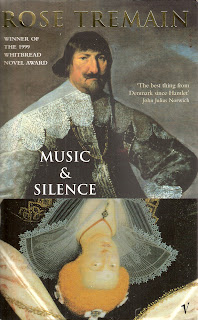 I’ve just been re-reading that wonderful piece of fiction by Rose Tremain, Music and Silence, which gives an imagined account of life as a musician in the court of King Christian of Denmark in the 17th century.  A central character in the book is an English lutenist employed as a replacement for a more famous (and real) one who left in some disgrace.  As the King wistfully points out to his new lutenist; “We had your Mr Dowland at court, and he was a man so full of his own importance that his great importance weighed him down and made hi miserable. He made nothing but enemies here.  Yet his music was sublime”.
John Dowland is revered as one of the great figures of English music – yet there is no reason to assume Ms Tremain got it wrong and we can be fairly sure he was a miserable bugger.  Arthur Bliss is all but forgotten even by those who are passionate enthusiasts for English music – yet everyone tells us how nice he was.  Is that mere coincidence?
Posted by Dr Marc Rochester at 9:03 AM