In the first few seasons of regular professional orchestral concerts in Kuala Lumpur it often seemed that if you did not like the tone poems of Richard Strauss you were stuck.  Unfortunately, I was not great fan of them but, since having the MPO perform every week was such a vast improvement over the total nothingness that had gone before, I persevered.  As it was, the MPO was such a fantastic orchestra it was sheer bliss to hear them irrespective of repertoire and, added to that the fact that Kees Bakels, who directed most of those Strauss performances, had such an ear for orchestral colour and so clearly relished the gorgeous sounds Strauss evoked, I was quickly converted.
For the past few seasons Singaporeans have had a similar problem; if they don't care for Mahler symphonies, they must feel hard done by.  With the SSO seemingly on a mission to get into the record books as the orchestra who has performed the most number of complete Mahler cycles, and the city itself already in contention as presenting the greatest number of Mahler symphony performances in a single year, my early enthusiasm for this music has quickly evaporated.  After hearing the SSO churn out yet another routine account of Symphony 5 last year (not a bad performance in any way – simply one which had nothing exceptional to say) I promised myself that I would only attend future Mahler performances if I were professionally bound to do so.
The tide, though, is turning.
Last month the Singapore National Youth Orchestra gave such a splendid account of Mahler 1 that I decided I did, after all, quite like the piece, and last night an even more remarkable thing happened.  The Orchestra of the Music Makers, one of Singapore's greatest musical glories, gave what was, for me, a totally absorbing and at times electrifying performance of Mahler 5.  They may only be an amateur orchestra whose playing has that rawness which is inevitable when players do not spend every moment of their waking hours practising and fine-tuning their instrumental techniques, and their performances are few and far between, with the result that they can throw themselves into what they do without worrying about preserving themselves for tomorrow's rehearsal or next week's concert.  But that doesn't stop them coming up with some pretty remarkable performances.  And last night's was about as remarkable as it gets. 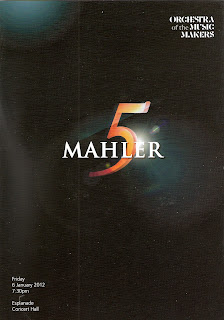 OMM is in danger of becoming an Orchestra of Mainly Mahler, but they are rightly proud of their ground-breaking Mahler 2; a performance which, released on CD, has quite literally gone around the world.  But their Mahler 5 was infinitely better; more assured, more alert and more absorbing.  Sitting in the auditorium relishing every moment of it, Beecham's comment about the English and music sprang to mind; the players of the OMM might not necessarily like Mahler, but they clearly love the sound it makes, and the strength of this performance was in conductor Chan Tze Law's willingness to let the players indulge in the luxury of Mahler's sound without imposing any personal agenda on the interpretation.
Thus it was that Mahler's typical orchestral sounds – those screeching woodwind, those perky bassoons, those funereal drum beats, those whooping horns – were given full reign without having to subvert themselves to a supporting role in a contrived formal design.  Architecturally Mahler 5 is complex, to put it mildly, and so many conductors superimpose their view of its structure which all too often results in something rambling and incoherent.  In contrast, Chan made no attempt to paper over the structural cracks.  Rather he did what I suspect was Mahler's intention all along; presented it as a celebration of orchestral sound rather than as something profound.  So it was that the famous Adagietto floated along ethereally, completely devoid of excess pathos and, for the first time that I can remember, simply presented as an unwavering expression of pure love.  I've never once heard the movement played with such unaffected affection before – and among the more memorable live performances I have attended in my time have been those from Horenstein and Bernstein, neither of which, I can honestly say, quite matched what Chan produced with his dedicated bunch of amateurs.
So many conductors seem to adopt the over-the-top approach characterised by Bernstein; emotionalising the emotion, passionating the passion, jubilating the jubilation, everything grotesquely overstated, everything presented as if on a high tension cable at any moment ready to burst into flames.  Over the 80 minutes of the work that approach quickly palls, although it certainly brings out its fair share of memorable moments.  Chan is the complete antithesis.  He merely keeps his players together through a clear and undemonstrative beat, tidies up the loose ends, draws in the more wayward threads and through subtle and intuitive listening, keeps it all on the rails without demonstratively leading from the front or pushing from behind.  His mere presence seems to inspire the orchestral players to drive the work along.  The emotional peaks may not be quite so breathtaking, but the overall landscape is infinitely more attractive.
When an orchestra is on top form, as OMM certainly was last night, it is quite invidious to single out individual players or sections.  After all, it is an orchestra, not a collection of individuals, and the results it achieves are due to cumulative effort rather than individual excellence.  But I could not let last night's concert pass without singing the praises of Alan Kartik, whose solo horn in the Scherzo was nothing short of spectacular.  He produced the most amazing tone; fiery, assertive, soothing and embracing. He rose above the orchestral texture and absorbed himself within it instinctively and, all in all, gave a vivid demonstration of what brilliant horn playing is all about.  He may, as most of the members of the OMM are, be heading to a career in business, commerce or politics but, on the strength of last night's performance, he could walk into any orchestral position anywhere in the world.
﻿ 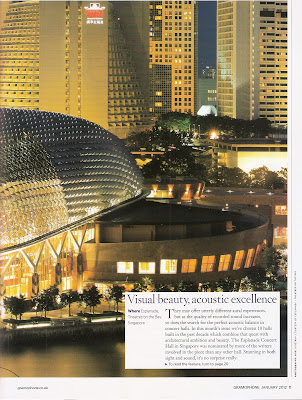 It doesn't quite end there.  The latest issue of Gramophone magazine ran an article on the world's newest concert halls in which the Esplanade was highly praised; "The sophisticated acoustic technology is all the more impressive for its seamless integration into the hall's circular design", wrote Charlotte Smith.  For those of us who spend time on both sides of the stage, the unqualified praising of the Esplanade's acoustics often seems ill-judged, and when I hear people describe its acoustics as "world class", I immediately want to argue.  The Esplanade's acoustics are not naturally world-class (in a way that, say Dewan Filharmonik Petronas's are), they have to be painstakingly nurtured to reach that standard.  It needs a conductor willing to listen to the sound, and able to take advice on seating musicians and placing instruments, and it needs a member of the hall's staff who understands both music and acoustics to sit in and be prepared to tweak the sound during rehearsals to get it just right.  Last night, that all came true and, during the Mahler Symphony I was conscious that the hall was responding to the orchestra in a way which was unquestionably world-class.  By putting his violas on front of the stage, placing the harp forward and generally moving the orchestra to where it suited the acoustics best, Chan got the most out of the hall, while the attentive presence of the Esplanade staff ensured that the hall did its bit to make this a memorable occasion.
So rarely do such things come together and work so well that I wonder whether, when 2012 draws to an end, Singapore will have heard anything quite as good as this again.  For the first orchestral concert of the year it's set a standard which will be hard, if not impossible to beat.
Posted by Dr Marc Rochester at 10:14 AM