Gramophone magazine imposes a word limit of 250 on most of its reviews.  While this certainly helps concentrate the mind, it does prove to be quite an obstacle when reviewing exceptionally good recordings or justifying bad reviews.  Luckily sub-editors adopt a generous flexibility when word counts are exceeded for good reason, and with those recordings which are unremarkable (for want of a better word) 250 words is more than enough.  The danger with such a tight word-count is that, unless you are very conscientious, you resort to the pointless platitudes which swamp those publications where brevity is seen as an end in itself (one thinks immediately of the pointless exercise of Twitter where the very act of reducing length leads to a superfluity of material).  But in most cases I find you can say all that is relevant and necessary in 250 words, even if you do regret the pearls of wisdom which must remain un-published.  Rarely do I feel the need to expand on a Gramophone review in another arena, but here’s one of those rare exceptions.

I have just submitted a review of Hansjörg Albrecht's recording of Peter Sykes’ organ transcription of The Planets for the March (or is it April?) issue and, of course, you will have to get the magazine to read it.  But, while the review of the disc itself could be reduced to the required word count without too many tears being shed on my behalf, the recording does raise a few questions which I would like to have brought out into the public arena.  Where better to do so than in this extravagantly wordy and un-edited blog? 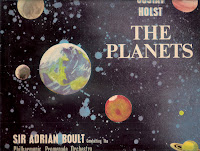 Gustav Holst’s orchestral suite The Planets has long been a dear favourite of mine.  I can’t remember whether it was Sir Adrian Boult’s recording of it on the Pye Golden Guinea label which I purchased from Eric Spencer’s record shop in Welling one Saturday afternoon when my choirboy finances had been boosted due to a plethora of weddings (at half a crown each), or Boult’s performance of it with, I think, the LPO in the Festival Hall sometime in the late 1960s (a time when I never thought to retain the concert programme or enter details into my diary, so cannot be specific about the occasion) which introduced me to the work.  But for half-a-century I have been a fanatic supporter of the piece. It was among the very first batch of recordings I was sent for consideration by Gramophone back in 1985, and was the work in which I made my début with the MPO on 4th June 1999: and I well recall conductor James Judd stopping the rehearsal in order that the orchestra could hear (and see) that astonishing full organ glissando in Uranus which usually gets obscured by the sheer volume of the rest of the orchestra playing fffff (and which, on a tracker organ, requires both elbows and forearms).
﻿
﻿ 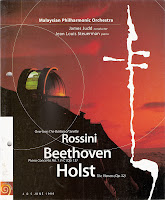 This latest recording of the work was an organ transcription released on the Oehms label.  The matter of organ transcriptions of orchestral scores has long troubled me.  In the past, before the days of ready accessibility of orchestral music in its original guise through recording and broadcast, there was a clear logic in providing transcriptions to bring the great works of musical history to a wider public than would otherwise have been possible; after all one organist in situ is cheaper than a hundred-piece orchestra on tour.  Going back even further, transcriptions have served to shed new light on great works and to add entirely idiomatic repertoire for the instrument; Bach's famous transcriptions of concertos by Vivaldi and others are a classic example.  But many modern-day organ transcriptions seem rather pointless to me.  Much as I admire the cleverness and intensity of David Briggs's Mahler symphony transcriptions (to which I referred in my previous post) they neither illuminate Mahler's original nor add anything of value to the organ repertoire.
With this transcription of The Planets, however, the issue is rather different. 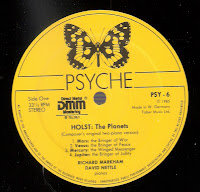