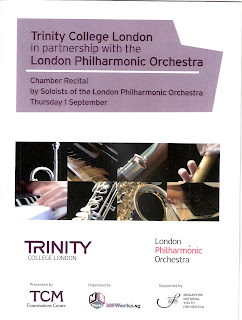 As we left the Alliance Française Theatre at Bukit Timah last evening, my wife whispered in my ear, “They weren’t very happy at all”.  She wasn’t referring to the audience, who certainly seemed to have enjoyed the concert, nor the organisers who could have been excused an unhappy glance or two when they looked around the sparsely-filled theatre, but to the six musicians from the London Philharmonic Orchestra who had just presented an hour of wind chamber music.
Frankly, they looked as if they would rather have been anywhere on earth doing anything at all than in Singapore performing to an attentive (if small) audience.  And I’m not at all sure that their collective discomfort didn’t affect my response to their opening item – Mozart’s usually sublime Quintet in E flat for piano and winds – which came across to me as damp and listless, quite unable to lift itself out of a kind of mechanical stupor in which all the notes were right but all the musical interest had been leeched out of it.
There was one glowing exception to the sulky visages on stage, and that was pianist Helen Leek who smiled her way through some amazingly challenging music.  An arrangement of Debussy’s L’Après-Midi d’un Faune by an American clarinettist, Michael Webster, nicely gave all the flute music of the original to the flute, all the clarinet music to the clarinet and absolutely everything else to the piano.  Nobody could have begrudged Ms Leek had she appeared at all disgruntled by this glaring inequality, but she grinned her way through it, tossing off great harp glissandi and sumptuous string textures with a cheerfulness she surely couldn’t have been feeling inside.
The Debussy, as well as the Poulenc Sextet which followed, were outstanding performances.  Perhaps surprisingly so since most of these players are not exactly long-time fixtures in the LPO but extras and occasional players whose biographies revealed that permanent membership of the LPO was more an aspiration than a reality.  (I was also amused to read in a programme which was a disgrace - given that Trinity College London, the organisers of the concert, are specialists in English language assessments - that flautist Katherine Bicknell was “sort after”; it makes her sound like an item of misdirected mail.) Possibly the heat had got to them; certainly oboist Daniel Bates spent most of his bars’ rests in the Mozart mopping his brow, and glistening, sweat-streaked skin was much in evidence on stage.  But to get to the point where we, as members of the audience, appreciated the quality of their playing, we had to break down that barrier of visible sufferance the players had put up around them.
A continual refrain when I am out and about examining and giving seminars on stagecraft, is the need to appear in control, in command and, most importantly, interested and involved in the music.  An old teacher of mine told me that if I wasn’t enjoying the music I was playing, how could I possibly expect an audience to do the same.  Nothing, he told me, is as infectious as dislike, and if you look as if you don’t like what you are doing, expect your audience not to like it too.  Do young musicians still get taught this small but vital aspect of public performance technique?
Of course you can go too far the other way.  A friend in KL claims he never goes to an SSO concert when he visits Singapore because he can’t stomach the antics of the orchestra’s leader, Alexander Souptel.  I know what he means.  Souptel waits until the house lights are down and the audience in rapt silence before bounding on to the stage bearing his violin aloft like a barbarian displaying the severed head of an enemy, all the while favouring the audience with such a broad smile you are inclined to wonder as to his sanity.  It’s a disturbingly flamboyant entry, but when you know that Souptel is not only one of the nicest men around but also a violinist of rare distinction, you are prepared to forgive what seems no more than a mild eccentricity; and there’s no doubt that his obvious enthusiasm for performing on stage communicates itself to the audience.
Perhaps a middle ground is to emulate the venerable broadcaster James Alexander Gordon who for as long as I can remember has been reading out football scores on the BBC.  Years ago he explained his method; voice up for the winners, voice down for the losers and completely level for the draws.  He must be a pretty old man by now, and when I heard him on the World Service last weekend he came across as a parody of himself, the voice bouncing up and down like a yo-yo and sliding over the draws like a ball over the most perfectly rolled bowling green.
I wouldn’t suggest huge smiles for happy music, deep frowns for sad, and blank faces for abstract music, but I would suggest musicians need to look as if they are enjoying what they do.  It may be the sound that matters, but if there’s an audience present, it seems silly to set up a visual barrier by looking as grumpy as the LPO musicians did yesterday.
Posted by Dr Marc Rochester at 2:45 PM