Chang Tou Liang on his Pianomania blog is running a series of pianist and conductor lookalikes.  Coincidentally, that matchless forum for contrived lookalikes, Private Eye, has one in its current edition which Pianomania has missed; not wishing to steal Tou Liang's thunder, I simply reproduce the Private Eye letter as it appeared. 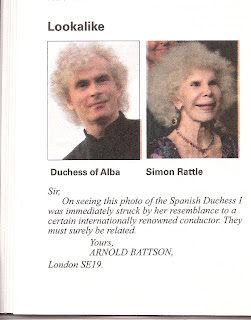 ﻿﻿﻿ ﻿ ﻿
﻿Apart from someone once remarking that I looked a bit like conductor James Levine, I've only ever been said to resemble non-musicians;  my old piano teacher thought I looked like Raymond Burr (the weighty actor of many years ago who played Perry Mason in the TV series), while my sisters swear I am the living reincarnation of the late Richard Whiteley, an anchor on Yorkshire Television in the UK who became famous as host of an afternoon TV quiz aimed at the unemployed and geriatrics in which he cracked appalling jokes and never understood anybody else's witticisms (which is perhaps the similarity my sisters recognised rather than any physical resemblance).

﻿﻿
But my voice, apparently, is very familiar.  There used to be a fellow on television called Alan Whicker who joined the millionaire set and travelled the world with a film crew in tow.  Countless of times people have heard my voice in shops and in the street, turned round to see the great man only to find, to their manifest disappointment, me.  I have even been asked if I do Alan Whicker's voice-overs, and even today there is someone out there doing the rounds as a voice-over artist for commercials and documentaries who sounds exactly like me, judging from the constant queries I get from strangers whenever I open my mouth.  Ironically, my voice is still occasionally heard by listeners to the BBC in the UK, and I never forget walking into a country pub with my wife in darkest Cornwall, going to the bar to place our order and having the whole pub and serving staff stop dead; "You're the man on the radio, aren't you?", the barmaid asked, and got everyone in the bar to listen to me as I spoke again.  There was no mistaking me for someone else; on this occasion they'd got me bang to rights.  My wife was profoundly impressed and so was I; who would have thought regulars at a dark pub down a tiny lane in the lee of Bodmin Moor would have been avid Radio Three listeners?
﻿
﻿﻿
﻿
﻿﻿
Lookalikes and soundalikes are, for all the fun they give us, not really my scene.  My real fun comes from composer's names.  There's nothing I like more than being able to play around with puns and jokes in my concert notes where a composer's name lends itself to such treatment.  Of course, the more abstruse it is, the better; jokes are best when, Richard Whiteley-like, nobody understands them except the privileged few.  After 13 years of writing coded jokes in the MPO programmes, only oboist (and fellow-Englishman) Simon Emes ever consistently spotted them.  On one occasion a visiting Canadian violinist harangued me in the bar after a concert for a subtle joke I had made at one composer's expense which she had completely misunderstood.  Not for me what one of my former ABRSM colleagues did during an examining tour of Hong Kong; faced with a grim piano candidate by the name of Wong Noh Tee wrote on his report form, "Not many right notees here!"  (I kid you not – he really did, and got dismissed for his pains.).
﻿﻿﻿﻿
﻿﻿
I like it when I can, for instance, suggest that Marco Enrico Bossi (1861-1925) was one of the commanding figures in Italian organ music of the late 19th century, or that Max Reger (1873-1916) wrote music which made as much sense when played backwards as it did when played forwards.  At Llandaff Cathedral we had a Precentor who I liked to catch out by juxtaposing various composers in the listing of psalm chants; I got him to intone with the utmost reverence "the chants are Alcock and Noble" before he realised and burst into giggles which echoed the length, breadth and height of the nave.
This playing with composers' names did get me into trouble at university when, charged with fellow-student Stuart Nettleship, to organise the music faculty's annual dinner, we hit on the idea of naming tables after composers, and choosing the composers to match the people sitting at the tables.  Thus we had the violinists on the Ysaÿe table, the singers on the Verdi table and the organists on the Bach table, the bores we put on the Rheinberger table, the avant-gardists went on the Cage table, and the only people to object were the senior professorial staff.  I think it was Stuart who hit on the idea of putting up a seating plan outside the ballroom with every name diner's name alongside a fragment of (unattributed) music.  Once the doors were open and the summons to dinner made, everyone had to find the table with the appropriate composer's name.  You'd have thought the violists would have identified the piece of Hindemith we'd found for them – but not a bit of it – but most others didn't have a problem.  It was all good fun until it came to the senior professorial staff, whom we had placed on a table identified by an extract from the Tabulatura nova of 1624.  Only one of them – the senior history fellow – recognised the composer, at which point he became exceedingly angry and stormed out.  His colleagues were more sanguine about having been placed at the Scheidt table.
﻿﻿
﻿﻿
I have a whole fund of such composer names, but a new one came my way today during the students' weekly lunch time concert at the Yong Siew Toh Conservatory.  A lovely concert, far too long (someone needs to tell these students how to time their performances so we don't overrun by 20 minutes again) but culminating in an absolutely brilliant account of the first two movements of Prokofiev's Second Piano Concerto given by Zheng Qingshu, it also included a series of pieces for viola by one Hans Sitt.  After listening to it I still couldn't judge precisely where he fitted into musical history, although I have since looked him up and find that he was born in Prague in 1850, died in Leipzig in 1922, and was violin professor at the Leipzig Conservatory.  The music was harmless but immemorable, and I joined in the applause, resisting the temptation to sit on my hands.