This weekend was supposed to see me in Hong Kong hearing the HKPO in Rachmaninov Symphony 2 and Piano Concerto 3 with Simon Trpčeski as part of their final season under Edo de Waart.  As it was, nothing quite worked according to plan.
For a start, de Waart is recovering from an operation and has had to cancel his first concerts of the season, his place taken by fellow (but healthier) Dutchman, Lawrence Renes.  Then, almost as I set off to the airport to catch the flight, my daughter came down with something which so worried my wife that she persuaded me not to go away until the doctor had given the all clear.  I was very sorry not to be able to give my planned pre-concert talk (apologies to all concerned and, if you really want, I'll email you a copy of the script!) and particularly sad to miss Rachmaninov 2.  My daughter is made of pretty resilient stuff and, of course, within 24 hours, she was almost back to normal, but a frantic wife's wishes are not something you override if you value your peace of mind, and so I had an enforced weekend at home.
As it was, while I didn't go to Hong Kong, bits of Hong Kong came to me, and over the weekend I encountered some of Hong Kong's musical elite right here in Singapore.  And I felt very embarrassed at what they found.
I bumped, first of all, into one of this blog's more dedicated followers who – when she's not ploughing her way through my excessive online verbosity - works for one of the SAR's most successful musical exports, Naxos records.  She was here in the run-up to her company's 25th anniversary looking at the local CD scene and thinking up ways to improve availability of Naxos products here.  Discussing the local market, which is not so much in terminal decline as barely shuddering its final death throes, it struck me just how pitiful Singapore must seem to any lover of recorded and broadcast classical music after the glories of Hong Kong.
Hong Kong has those world-class CD emporia - Prelude, Sun Cheong, Hong Kong Records, etc. etc. - and a very active society of audio-buffs who adore classical music; the old Singapore Gramophone Club died out decades ago and the last talk I went to here about recordings was attended by less than 10 people.  Hong Kong has its outstanding dedicated radio station, RTHK Radio 4, polished, professional and with a strong and loyal following; how nauseatingly amateurish and pitiable is Singapore's miserable little Symphony 92.4.  And of course Hong Kong is home to what now must be the biggest and certainly the most successful dedicated classical music record label in the world, Naxos.

My first Naxos recording, bought in 1987, was a pretty ghastly affair. Rimsky-Korsakov's Scheherazade (with a total disc playing time of 42'31"), featuring the Slovak Philharmonic Orchestra and conductor Bystrik Rezucha (who he??).  The anonymous liner notes told you next to nothing and the recorded sound was deadly.  Compare that with one of my most recent Naxos acquisitions, 68'49" of orchestral music by Michael Daugherty performed by the Bournemouth Symphony Orchestra under Marin Alsop.  It's a demonstration-quality recording with copious and informed liner notes by the composer himself.  From grotty cut-price recordings bought for peanuts from eastern European orchestras desperate for some hard international currency and produced with a minimum of care, to cutting-edge recordings of remote repertory by the major orchestras and conductors of our day is, truly, a quantum, leap. 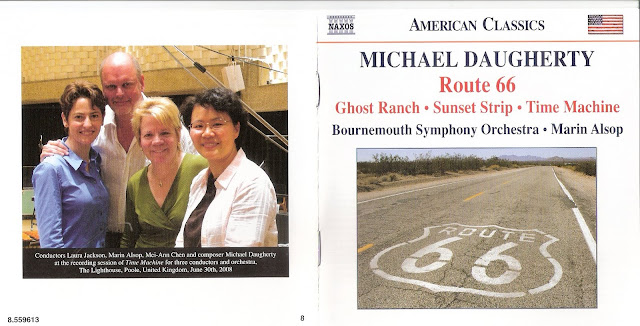 Yet, in Singapore, I suspect that the highest expectations music lovers have of recorded quality would render the Rimsky-Korsakov disc as something very good indeed.  Many will suggest that the "CD is dead", that we have "moved on" and that with YouTube, iTunes and whatever else you care to label your downloaded and transitory electronic music sources, there is no space for the CD.  But there is.  While the Naxos lady reckons that there is "a good six years at least" left in CDs before they are replaced by some other medium, neither she nor I have any idea what that medium is.  It certainly does not seem to have bene invented yet.  Distressingly, after decades in which record companies have striven to create a more realistic and vivid sound and have supported this with ever more scholarly and readable in-disc literature, the fashion now is for convenience over quality and accessibility over aural acceptability.  Random tracks are downloaded or played over the radio without anyone bothering to tell you what they are, who is playing them, or anything at all about the music.  The assumption is that all we are interested in is some background sound, irrespective of its provenance.  It is shaming that recorded and broadcast classical music in Singapore is on a par with Sierra Leone and Southern Sudan.
Shame was the order of the day when I went to the Arts House to hear the Principal Clarinet of the HKPO Andrew Simon, out on a sabbatical year (and unfortunately having to hand over that wonderful solo in Rachmaninov 2 to a substitute), and Warren Lee, a pianist I have met many times when promoting Trinity exams in Hong Kong.  Warren is Music Director at St Paul's Co-educational College in Hong Kong, which boasts an outstanding music department, and has been recruited by Steinway as one of their signature artists.  Their Friday evening recital should have been a gem.  It was certainly a lovely evening for companionship and relaxed music making of the highest order, but of the audience (I counted 10), over half seemed to be Hong Kong visitors or expats.  Singapore managed to dish up worse still.
Best to leave my review from the Straits Times to tell the sad story.  I'll just say that, much as I love Singapore and the rich musical life here, it's got some way to go to match Hong Kong in at least some key areas.