A youthful ambition – ultimately fulfilled – to become a bus driver led to months working as a bus conductor before I was finally allowed into the cab.  Even for a bus conductor, the training was surprisingly intense; three days dealing with such issues as operating ticket machines, handling change, dealing with passengers, changing the destination blind and, I kid you not, operating the bell (apparently those long ropes which used to be strung along the inside of double-deckers were prone to stretching and we were shown the way to get them to ring clearly and precisely even when they were drooping down well below head level).  When I finally stood on the platform in charge of my first solo No.9 I felt confident that I was adequately equipped to handle whatever the world of stage bus travel could throw at me. 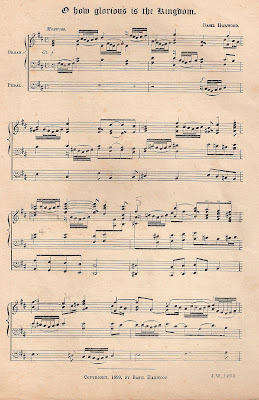 Compare that with my first solo outing as a conductor of music.  What training had prepared me for the ordeal?  None.  When I stood up in the aisle of Guildford Cathedral to conduct (I was assistant organist of the church slated to sing Evensong that day and, as the anthem was Harwood's O How Glorious, the Organist decided he wanted to play - and who can blame him, just look at the first page!) all I had behind me was the aural test in my graded ABRSM piano exams which obliged me to beat two, three or four in a bar to a rigid pattern.  When, years later, the ABRSM announced its intention to abandon this test, I stood up half jokingly to say that it was a bad idea since this was the only proper conducting training most British cathedral organists ever received, and was shocked when the British cathedral organists amongst the assembled throng of examiners all agreed.  When, at university, I was obliged to conduct an entire concert of Palestrina, the ABRSM training did not really help and the final straw came when a choral society I conducted along the North Wales coast, performed The Country Beyond the Stars by Daniel Jones.

The choral parts are straightforward enough, but there is a central orchestral symphony ("Joyful Visitors") which runs in an alternating 3/4, 3/8 time signature, and I couldn't handle that at all.  The society had booked members of the Royal Liverpool Philharmonic to play and, after sitting down and going over it with their excellent concert-master, he suggested I just tried to hit the down beats and they would do the rest.  I have to say, despite this difficulty, any choral society with a competent conductor should attempt The Country Beyond the Stars; it's a fantastic sing, a great piece for the audience and, astonishingly, since Charles Groves recorded it with the WNO chorus in 1972, I don't think it's ever been recorded again (although the Groves has come out again on a Lyrita CD).  For my part, though, I decided I'd abandon conducting unless and until I could get some proper training. 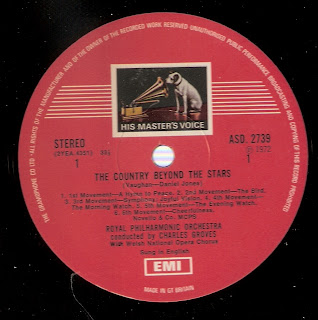